Ahead of its launch later this year, the 992 Porsche 911 GT3 has made a brief appearance in the marque's 2020 Super Bowl film 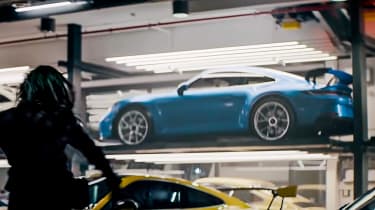 Following our first sighting of the 992 911 GT3 in late 2018 and a glimpse at the wingless Touring variant last year, Porsche has given us our first undisguised look at its next-generation GT car in its latest Super Bowl commercial.

All previous sightings of the model came with a healthy dose of camouflage and shape-disguising cladding, but this teaser displays an example that appears to be production spec. Though only on screen briefly, the 992’s trademark rear light bar can be seen sitting beneath a rather large wing, with wheels of a similar design to those seen on the current car also making an appearance.

Earlier spy images revealed that the model will come complete with a twin centre-exit exhaust, more aggressive front and rear bumpers over the standard Carrera’s and a pair of carbonfibre-backed bucket seats as before. Though we can’t be certain, a naturally aspirated 4-litre flat-six with over 500bhp is expected to sit at its heart, mated to either a PDK dual-clutch or manual transmission.

Though the recent teaser image appears to display a traditional set-up, earlier test mules featured an unusual disguise around the wing, perhaps to conceal an active aero system – cladding stretches up the supports and over onto the top plane of the wing, suggesting that it could be supported from the top, similar to on Porsche’s 911 RSR race car. Another possibility is the use of Lamborghini’s ALA tech, as seen on the Huracán Performante and Aventador SVJ.

Elsewhere, there’s a more subtle spoiler that flicks up from the body just above the rear light bar, while ahead of that are two large intakes to satisfy the six-pot’s appetite for air.

It’s no secret that evo holds the 911 GT3 in very high esteem – its many victories in our own Car of the Year tests are testament to this. And as Porsche has continued to maintain that level of quality through every GT3 model so far, you’d put money on the 992 version continuing with this tradition of success...