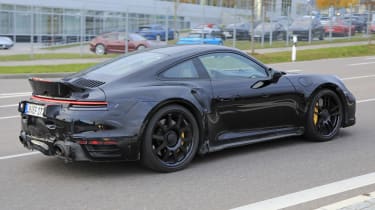 Porsche has already spawned four standard 992-generation 911 Carrera models in both coupe and cabriolet forms, but the Stuttgart manufacturer isn’t stopping with the new derivatives any time soon as it readies to unleash the next Turbo. We’ve spotted prototypes testing in both the US and Germany ahead of its 2020 reveal, which promises to be the fastest 911 Turbo yet.

Recent images reveal a ducktail spoiler mounted to the engine cover, something not yet seen on a 911 Turbo in the brand’s history. Immediate thoughts turn to the possible introduction of a 992 Sports Classic, but previous versions were based on the Carrera, not the turbocharged, all-wheel-drive Turbo we see here. A Touring-style pack for the Turbo is another possibility, but we’ll have to wait and see to find out for sure.

Earlier mules revealed the adoption of a recognisable wide body, with side air intakes feeding the Turbo’s increased appetite for air, an active rear wing and four square exhaust tips as we saw on the 991. The rear bumper is also similar to the Exclusive Manufaktur unit available on the 992 Carrera, with the front splitter featuring a slightly more aggressive design with its tell-tale twin-bar indicators visible on other Porsche Turbo models. It’s not clear as to whether it’ll feature the inflating, active front splitter from the 991, but active aerodynamic elements like variable grille slats will be utilised. The brakes on this test car look to be standard steel units, but Porsche’s PCCB carbon ceramic units will be found on the options list.

A handy image of the dashboard reveals this near camo-free test mule might be the range-topping Turbo S, if the correct dial has been fitted, a model that will likely push over 600bhp to all four wheels from a turbocharged flat-six. Given the 228lb ft torque bump the 991 Turbo S was given over the 991 Carrera S, we’d expect the 992 to produce somewhere in the realm of 600lb ft. Standstill to 62mph will also come in under three seconds, topping out at just over 200mph, moderate improvements over its predecessor. 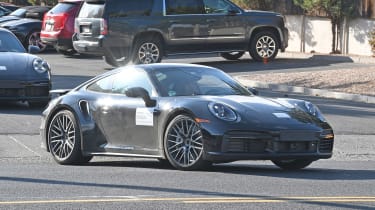 As for the transmission, the standard 911 Carrera’s new eight-speed PDK ‘box will replace the previous seven-speed, while a mild-hybrid version may eventually be added to the range later in the 992’s model cycle.

As with all new 992-gen 911s, one potential concern is weight. The 991 Turbo S gained 185kg over the Carrera S of that generation, if the 992 saw the same gains, it’d sit at a rather hefty 1700kg. We’re sure it’ll have the power to push along the road with plenty of urgency, but more than ever the Turbo’s GT credentials might well overtake its traditional sporting character. We’ll have to wait and see if our concerns are credible.