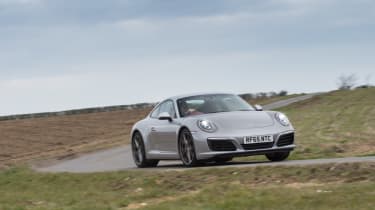 There's still a characteristic lightness to the 911's nose, but it finds so much turn-in grip that you don’t need to make allowances for it, or trail-brake dramatically, anymore. The rear end is now more locked down, too, so you’re no longer managing a heavily rear-biased weight distribution.

In fact, there are times when the 911 actually feels like a mid-engined car. That’s an extraordinary achievement on the part of Porsche’s chassis engineers, but it does mean that the typical 911 character that lived for five decades has been lost. No longer does the 911 demand a very particular driving style of its driver. The Carrera S does actually retain a little more old-school 911 charm than the entry-level model – you’re just slightly more aware of the engine being located behind the rear axle – but it’s hardly night and day.

Mid-corner grip levels are enormous, traction is mighty in all models and body control is supreme. With the optional Porsche Dynamic Chassis Control fitted there’s such abundant body control, in fact, that the driving experience is actually less engaging than it could be.

The 911’s chassis is now so competent that you have to be driving very fast indeed to feel it come alive – opportunities to do so safely on the road are few and far between these days. Consequently, there are times when the Carrera can feel somewhat ordinary, which is exacerbated by the less-than-joyful turbo engines and uncommunicative steering.

The Carrera’s ride quality is pliant and cushioned enough to be comfortable in everyday use while also absorbing lumps and bumps at speed very effectively, but naturally it does ride more firmly than an executive saloon car. The Carrera S comes on 20-inch wheels as standard rather than the Carrera’s 19-inch rims, which does mean that ride quality suffers markedly, particularly on rougher sections.

The electrically-assisted steering system has been improved significantly over the very earliest examples and it’s now very direct and accurate, but it does still lack the detailed feel and feedback offered by earlier generations of the 911. In longer corners, for instance, the helm feels numb with none of the constant patter that marked out 911s for so long. 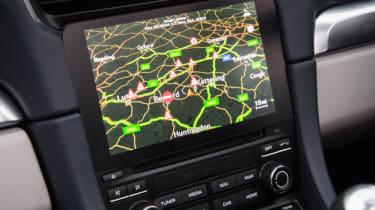 The Carrera 4 and 4S get the latest version of Porsche’s four-wheel drive system, which uses an electromechanical clutch to distribute torque when required to the front axle, with a claimed maximum response time of only 100 milliseconds, continuously informed by a variety of sensors. The four-wheel drive cars benefit from a wider rear track (42mm on the C4 and 36mm on the C4S) with 10mm wider rubber at the rear. And as with all 991s, there’s an extensive range of high-tech chassis options available such as the PDCC active anti-roll bars and PTV torque vectoring, at a price of course.

On a wet road the four-wheel drive Carrera 4 models do offer more security than their rear driven counterparts, which is a bonus in what can be a slightly aloof sports car when grip levels are low. On a dry road, however, the rear-wheel drive car is just a little purer and more engaging.

On track, the rear wheel drive 911 Carrera is beguiling. The turbocharged engine, with more torque lower down in the rev range than its predecessor, can make corner exit slightly hard to judge, initially. It will spin the rear tyres very late in a bend, where there isn’t much left of the corner for you to manage the slide. However, once you’ve learned the way in which the rear engine lets you manipulate the balance – both on and off throttle – means you can avoid any unpredictable handling.

You need to brake deep into a corner to give the front tyres enough traction on turn-in. Then the moment your foot moves from the brake pedal to the throttle creates a slight yaw angle, just enough to eradicate any possible understeer. Once on the throttle the weight shifts to the rear, and with the weight of the engine helping too, the 911 will regain rear-end grip. More throttle and you can use the rear to drive you around the rest of the corner, keeping the rear tyres right on the edge of grip. The torquier engine means that this level of throttle adjustment is available more of the time. No longer do the three planets of revs, corner speed and gear selection have to be perfectly aligned. The turbocharged engine is also linear and predicable, so you are able to balance the car with the throttle confidently.

The chassis is so transparent that you’re able to push the car further and further each corner, and if you go too far there’s still enough grip and adjustment to recover any small mistakes.

It is a huge amount of fun, and when you nail a corner teetering on the edge of grip all the way round, it’s hugely satisfying.

The Cabriolet and Targa models major on grip, stability and security rather than on-the-limit thrills. Their structures are very stiff for open top cars, but you can still feel them shuddering over rough sections of road. With more weight to carry, particularly in the case of the Targa, the roofless models are less exciting and less responsive  than the coupes.

The amply endowed Turbos aren’t the last word in dynamic finesse or driver involvement but do show good balance. Yes, there’s some steady-state understeer through most corners, but the four-wheel-drive system and torque vectoring differential seem to really work wonders, allowing you to drive through the understeer to a delicious phase where the car finds a broad plateau of neutrality. With a four-wheel steering system the Turbos are deceptively agile.

The ride is firm but supple enough for everyday use, and the PDK ’box is smooth, quick and slick but still has the slightly soft-edged feel that is eliminated so impressively in the GT3. Some of that is down to the longer travel of the Turbo’s paddles, which feel needlessly gloopy after the quick, decisive action of the GT3 set-up.

Curiously, the Turbos are actually at their best on circuit where you have space to get them moving around. You can use the weight over the rear axle to get the car rotating into the apex before applying the throttle hard to use the clever four-wheel drive system to pull the car straight. Driven like that the 911 Turbo is a hugely entertaining car.

As for the GT3 and RS models, as soon as you have the wheel in your hands you feel hardwired into the chassis and every tiny shift it makes, which lets you drive it like no 911 should be driven. They are truly great modern day sports cars.

One option that is exclusive to the higher-powered models is Porsche Dynamic Chassis Control (PDCC). It uses variable anti-roll bars to cut body roll during hard cornering. It’s a clever system, but since roll is how the driver feels the loading of the chassis in corners, we think it’s best avoided.