We drive the new Porsche 911 50th Anniversary Edition, a 911 Carrera S with a host of desirable options 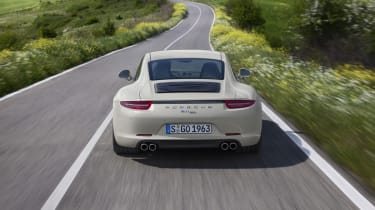 The Porsche 911 50th Anniversary Edition, a limited edition 911 to mark 50 years since Porsche first unveiled its rear-engined sports car back in 1963. It’s based on a Carrera S with a few styling tweaks and a handful of optional extras, but not a great deal else. Production will be limited to 1963 units, with prices starting at £92,257.

The 50th Anniversary Edition is rear-wheel drive, but it uses the wider bodyshell from the four-wheel-drive Carrera 4. That not only makes it look more muscular than a standard Carrera S, it also means that there’s a wider track and revised suspension settings.

Porsche Torque Vectoring, which includes a mechanical limited-slip differential, is an optional extra on the Carrera S but it comes as standard fit on the 50th Anniversary Edition. Porsche Active Suspension Management (PASM), the marque’s impressive adaptive damping system, is also included.

The familiar 3.8-litre flat-six, which develops 394bhp at 7400rpm, is carried over unchanged. Our test car featured the seven-speed manual, but the paddle-shift PDK gearbox is also available at extra cost.

Over and above the standard car, the most readily identifiable upgrades include the Fuchs-inspired 20-inch alloy wheels, the darkened headlights surrounds and the chrome highlights across the engine cover. Geyser Grey paint, shown here, is specific to the 50th Anniversary Edition, while a darker shade of grey and the standard Carrera S hue Basalt Black is also available. Inside, cloth seat inserts and a dash-mounted plaque set this limited edition model apart from the rest of the range.

For the most part, very good indeed. The wider track does add a degree of security when really pressing on, but otherwise the driving experience is very similar to that of the 911 Carrera S. As with that car it’s the electric power steering that lets the side down a little; it’s accurate and direct, but there isn’t a real sense of connectivity to the front wheels, which can be disconcerting at times.

Everything else, though, including the damping, body control and agility are all very good. As with all other 991-generation 911s the chassis balance is more neutral than ever before. The driver is still aware that the engine is slung out behind the rear axle, but it doesn’t dominate the driving experience as it once did.

The engine is exceptional, with decent torque from the mid-range and a real appetitive for revs at the top end. The seven-speed manual gearbox has improved over the past couple of years, but the throw still isn’t as slick at that of Porsche’s brilliant six-speed manuals.

With the optional sports exhaust fitted the flat-six howl at high revs is addictive, particularly across the final 200rpm; a pity, then, that with such long gearing you’ll need to travel beyond the UK motorway speed limit even in second gear to hear it.

In Sport Plus mode, the car shakes itself down and really comes alive. Support at each corner is ramped up – although since PASM is adaptive it still works on uneven surfaces – throttle response is sharpened and a brilliant throttle blip function perfectly matches engine and road speeds on the way down the gears.

That wider track adds an additional layer of sure-footedness, making this the most satisfying Carrera S we’ve yet come across. We still lament the loss of the 997’s wonderful hydraulic steering and the 991 has also lost some of the earlier car’s immediacy and urgency of response, but it remains a crushingly effective sports car.

This is the second retrospectively-styled 911 that Porsche has launched in the space of a few years. The 997-based Sport Classic of 2010 has since become a true collectors’ item. That car was limited to 250 units and boasted much more substantial upgrades over the standard car, so we don’t expect the 50th Anniversary Edition to rise in value as the Sport Classic has done.