We drive the new Porsche 911 Targa 4S, and there's a Tiff Needell video too 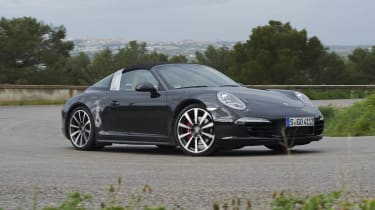 The new Porsche 911 Targa: not quite a coupe, not quite a Cabriolet. The Targa has been around for almost as long as the 911 itself, but it’s never really registered on the evo radar. The very early models are charming with their retro roll over hoops and glass canopies, but the recent models, from the 993 onwards, have instead used a sliding glass section that has never managed to be attractive or charming.

The new 991-based version ditches the sliding glass panel for an intricate powered roof mechanism that also revives the iconic roll hoop. To our eyes, the new Targa is best-looking topless modern 911 to date. 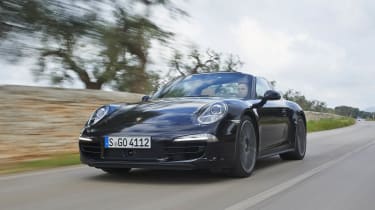 The Targa is based on the Cabriolet model with modifications made to the body-in-white around the B-pillar to accept the roll hoop, which does add some torsional rigidity. Four-wheel drive only, the Targa carries close to 110kg in additional mass compared to an equivalent coupe, mostly due to the extra structural bracing and the roof mechanism. The Targa’s suspension has been tuned with half an eye on improving ride comfort.

Two versions will be available; the Targa 4 costs £86,281 and is powered by a 345bhp, 3.4-litre flat-six, while the Targa 4S, driven here, costs £96,316 with a 394bhp 3.8-litre engine out back. A seven-speed manual gearbox is standard, but most buyers will opt for the PDK twin-clutch transmission. 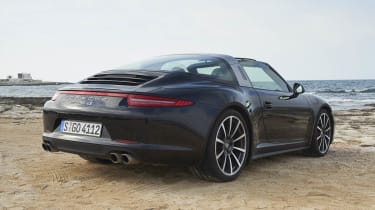 The drivetrain, familiar to the rest of the range, is very difficult to fault. PDK works superbly as an automatic and shift speeds in manual mode are impressively quick. The engine pulls hard from the mid-range and then rips around to its redline with real urgency.

The four-wheel drive system adds a layer of security and infallibility; only a very clumsy throttle application in a low gear and on a wet surface will trouble the traction control system.

Comfort and security are the main themes here. There is still a certain sharpness to the ride quality over small lumps and bumps, but it does soak up surface imperfections with more pliancy than the coupe. The damping quality is superb; compressions and larger intrusions are dealt with swiftly and without deflection. The natural chassis balance is neutral, pushing into slight safety understeer towards the edge of grip. In the firmer chassis modes there is such abundant body control that the car feels intimately tied into the road surface, but it still isolates the occupants from it. The steering, meanwhile, is aloof and slightly remote when it really matters.

Tiff Needell was also on the car’s international launch in Italy. His video review of a manual Porsche 911 Targa 4S is below...

Both Targa models get a Sport button to add weight to the steering and sharpen the throttle response, but only the Targa 4S gets Porsche Active Suspension Management, which can adapt to suit the road surface, as standard. Similarly, Porsche Torque Vectoring, which uses the inside rear brake to pivot the car into turns to good effect, is standard only on the Targa 4S and optional on the Targa 4. One option that is exclusive to the higher-powered model, Porsche Dynamic Chassis Control, uses variable anti-roll bars to cut body roll during hard cornering. It’s a clever system, but since roll is how the driver feels the loading of the chassis in corners, it is best avoided.

On or around the limits of its capabilities, the Targa is so composed, unflustered and, in a sense, lifeless that it just doesn’t engage and reward in the manner that the two-wheel drive coupe can.

The coupe is the much more enjoyable drivers’ car, but the Targa is better looking than the Cabriolet and somehow cooler, too. If you insist on some form of retractable roof for your 911, the Targa is the one to go for.

It must be said that at £96,316 the Targa 4S is quite a pricey machine. Its rivals include the Audi R8 V8 Spyder, which is sure to turn even more heads. The BMW M6 Convertible is just £3000 more expensive, and while it’s a much less agile car, its 552bhp puts the Targa’s 394bhp to shame. 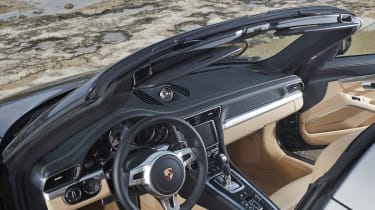 For kerbside drama, a 991 Targa doing its thing takes some beating. At the touch of a button, either within the cabin or on the remote key fob, the glass canopy and a section of rear bodywork lift up as one and drop behind the rear bumper. The fabric roof then rises and folds into itself, tucking down into a stowage compartment behind the small rear seats, whereupon the canopy returns to its normal position. The 19-second process is theatrical and elegant, but the Targa cannot shed its roof on the move because the taillights are briefly obscured by the large panel.