Undoubtedly the best Boxster in the range 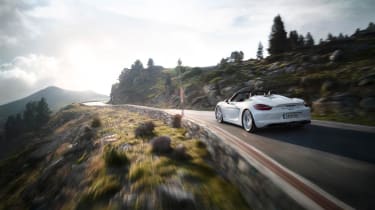 The Boxster Spyder is the most extreme version of Porsche’s 981 Boxster. It is lighter by 30kg, longer by ten millimetres and lower by 11mm when compared with a Boxster GTS. The front end is more aggressive in its design and there are distinctive streamlined humps behind the rollover hoops (a tribute to the 718 Spyder of the 1960s).

The Spyder’s 3.8-litre engine is a mildly detuned version of the one found in the new Cayman GT4 (and, obviously, the 991 Carrera S). Power is 45bhp up on a Boxster GTS (but 15bhp down on the Cayman GT4) and torque is up a healthy 37lb ft, taking the total to 310lb ft. The steering rack is slightly quicker (taken from the 911 Turbo apparently) and the steering wheel is 360mm in diameter (like the GT4 and GT3 RS). 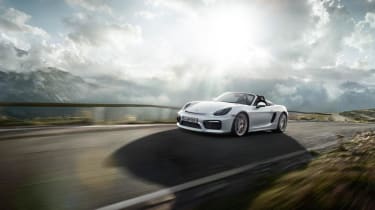 Suspension is the 20mm lower, passive Sports set up that is also a no-cost option on the Boxster GTS. There is a Sport Chrono package as standard, the most notable benefit of which is the provision of dynamic transmission mounts. On the rear axle is a mechanical LSD (22 per cent locking under power and 27 per cent on the overrun), which is part of the Porsche Torque Vectoring system.

One of the biggest talking points is the new Spyder’s roof. The biggest criticism of the old Boxster Spyder was that its manual roof was little more than a shower cap that was incredibly fiddly to put on or take off. The roof on the new car is still a largely manual affair, but is far easier to erect and stow, while it can also be used right up to the Spyder’s top speed of 180mph. The mechanism saves 10kg and the large rear deck lid, which conceals both the folded hood and rear boot, is made of aluminium.

Initially there isn’t a stark difference to the wonderful Boxster GTS although the 918 inspired seats are a lovely upgrade. Despite the larger engine, the rather long gearing disguises the extra oomph when you are merely pottering and the sound is simply the same lovely note that we’ve admired before, with a distinctive crackling on a trailing throttle. Increase you pace however and the extra performance starts to make itself felt, the engine really getting into its stride at about 5000rpm (just as the maximum torque plateau is reached) where it pulls with noticeably more vigour. 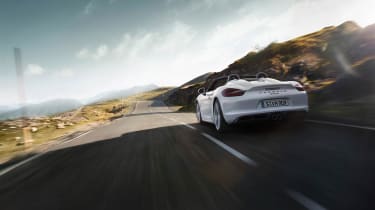 Any reduction in weight is hard to feel, particularly as our car came equipped with air conditioning and a full PCM system. However, on the frequently tight and twisting roads that we drove the Spyder, the quicker steering was very welcome. Through a series of fast direction changes the Spyder more than kept up, retaining a beautifully balanced feel and flick-flacking one way, then the other with huge grip, great composure and reduced input at the wheel.

The steering in the Boxster Spyder is taken from the 991 Turbo (which has a quicker rack) and the lovely, smaller, 360mm diameter steering wheel also seen on the GT3 RS.

As a result there is more weight in your hands and a greater economy of movement as you guide the car through corners. Although the steering doesn't quite have the liveliness of the GT4's, (this is not a full 'Motorsport' car, remember, so it doesn't have the 911 GT3 front end that the ultimate Cayman has), the Spyder nonetheless changes direction with increased agility and simply beautiful composure. The extra grunt also means it's easier to unhitch the rear tyres, although the mechanical LSD could lock more aggressively, if were being picky.

Equipped with optional carbon ceramic discs, the Spyder was peerless under braking, blending huge power with fantastic pedal feel. The gearlever is the shorter item also found in the Cayman GT4 and it merely improves (albeit only very slightly) an already fantastic shift, the action rewarding if you choose to take your time, yet not baulking if you flash it through as fast as your hand will move. The ride, while exceptionally well controlled, was surprisingly compliant over some extremely broken surfaces that we encountered. 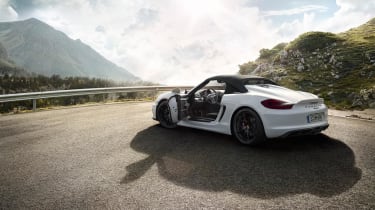 Overall, the Spyder is undoubtedly the best Boxster in the range. Rather than any single stellar trait, it's more a subtle coalition of small improvements that lifts the Spyder driving experience just above that of the GTS, but overall the Spyder is worthy of its place at the top of the 981 range. At £60,459 it seems like something of a bargain too.

> For an in-depth review of the Porsche Boxster, check out our sister site Carbuyer

Undoubtedly the Spyder’s biggest rival is the £6587 cheaper Boxtser GTS. What the GTS lacks in exclusivity, it arguably makes up for in practicality, with a roof that can be raised or lowered at the touch of a button at speeds up to 30mph. The Standard Boxster shape is also a very good-looking design in its own right. However, the Spyder’s greater power and quicker steering do look like a relative bargain at just £60,459 and, of course, if you are a fan of the exclusive speedster-ish styling then there is only one option.

Outside the Porsche stable, the other very appealing alternative is the Exige S Roadster. If you are looking for a car with a really lightweight persona, then the 1166kg Lotus is even more stripped out and slightly faster (0-60mph taking 3.8 seconds compared to the Porsche’s 4.3). At £55,500 it is favourably comparable on price too.

The rather attractive roof with its flying buttresses is a relatively simple thing to put up or fold away. The latch to the header rail is motorised but otherwise the folding needs to be done manually. The trickiest part is finding the button beneath the canvas that releases each of the ‘fins’ attaching it to the rear deck. With the roof down it’s also possible to drive comfortably and reasonably un-buffeted with the windows down (thereby ensuring the Spyder is viewed with the cleanest lines and most stylish appearance).