Twingo gets the Renaultsport treatment, including option of Cup chassis 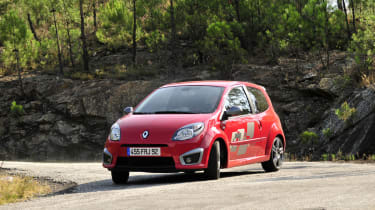 It’s 15 miles before I begin to take much notice of the car. This isn’t a reflection on the Renaultsport Twingo, but our circumstances. We’ve just arrived in Portugal, and photographer Dave Smith and I are struggling with route books, road signs, tolls and locals who cruise casually six inches off your rear bumper. Perhaps closer in the case of the black Renaultsport Megane whose driver then jinks inside, throwing me a swarthy smile as he shamelessly cuts me up. Charitably I reckon he only wanted a close-up look at the Twingo – until I watch him raggedly zagging his way past another four cars. Tosser.

Porto, once we’ve fought our way into its old centre, is mesmerising. Dark, brooding, almost Dickensian. The little Capsicum Red Twingo brings a dash of colour and vitality to the narrow, cobbled streets of this world heritage site. But it’s all back to front. The centripetal effects of urban regeneration have barely touched the broken buildings that fringe the plunging gorge either side of the Douro river. Porto has a rotten heart.

We don’t linger long. With gear stowed and cabin accessed via the flick-up door handles, we barrel out of town. There’s a sense of urgency – no, immediacy – to Renaultsport’s latest offering that’s obvious even here. Stuff just works: crisp throttle, consistent brakes, detailed ride, easily read dials – the Twingo is game from the get-go.

This car had to perform in town and it does. The thing is, the Twingo is a departure for Renaultsport. It can’t simply trade on the hardcore B-road appeal of the Clio, because it’s doing battle in an already established class in which it has little experience. Rivals are the Citroën C2 VTS, Suzuki Swift Sport and, from next year, Abarth’s 500.

All are aimed at young buyers, for whom dynamics and design are interlinked. The car has to look good as well as feel good – and be as cheap to insure and run as it is to buy. Hold that thought as you learn that the RS Twingo has less power than it could happily handle and that there are two chassis choices, Sport and Cup.

Ours is a Cup, which features an additional 4mm suspension drop, 10 per cent stiffer springs front and rear and larger 17-inch wheels, all for £650 over the softer Sport’s £11,550 asking price. That model in turn is 10mm lower, has 30 per cent stiffer springs and dampers, a bigger anti-roll bar, quicker steering rack and significantly wider tracks (up 60mm front and 59mm out back) than a standard Twingo GT.

The pushed-out wheels (a far prettier design for the Cup than the Sport) are prevented from poking out beyond the bodywork by a set of bolt-on body panels. Styling-wise these are the least successful aspect of the car – especially where the trim has been cut away to allow space for the fuel cap. (Actually they’re not the worst thing, the decals are truly woeful, but at least they’re optional.) As a package, though, the Twingo hits the right note – although whether it’s bold, brave and exciting enough in a world gone mad for the Fiat 500 is another matter.

Already I suspect it’ll have the edge for chassis dynamics – and we haven’t even got to the good roads yet. We’re heading inland from Porto on the motorway, allowing the Twingo to expend some pent-up energy. Not that it’s got a great deal to spare. The normally aspirated 1.6 doles out 131bhp, a big step down from the Clio’s 194bhp. Zingy throttle response makes it feel tractable and lively, but in reality it’s short on grunt, the real vim and vigour only arriving after the 4400rpm torque peak.

The engine has undergone quite a bit of development from the 109bhp unit that sees service in the Clio and Mégane. The camshafts have been tweaked so the valves lift higher and stay open longer, the compression ratio is up from 10.0:1 to 11.0:1, there’s a revised throttle valve and new intake system. And, as we see that evening in a cutaway drawing, a remarkably long and convoluted exhaust manifold packed into a tiny space. Renaultsport is so proud of this that it’s patenting it. Internally it’s been nick-named ‘the pack of noodles’ and it helps make the Twingo one of the most tuneful little cars we’ve heard in ages, the exhaust note all gruffly and full of intent.

Jean-Antoine Petit is pleased about that. He’s Renaultsport’s Performance Integration Manager – the chap who makes sure each Renaultsport product contains the same magic. ‘We got the chassis compromise in three or four steps, but it took a long time to tune the engine note,’ he tells me. ‘We knew we wouldn’t have much power, so it was important that the car feels fast.’

So why use a five-speed gearbox, when an extra ratio would aid sprinting ability and enable you to keep the engine on the boil? ‘It wouldn’t fit,’ he says. ‘We only have one centimetre of clearance in the sub-frame with this gearbox.’

It’s a shame, because the five-speed transmission isn’t covering itself in glory. Part of the trouble is the tortuously twisty roads we find ourselves on as soon as we turn out of the hotel gates early on day two. It’s second and third gear all the way, and that dog-leg shift isn’t as sweet as the straight slide back into fourth, while the ratios are too gappy, with each gear having too much work to do. An extra ratio would be very welcome here.

The A-pillars always seem to be getting in the way, too. But if that all sounds rather negative, these are minor irritations. The Twingo gets so much right. The seats, for example, use the same basic frame as the standard Twingo, but have been beefed up and dropped by 15mm (‘I think best-in-class seats,’ Petit had said last night, and I don’t disagree), so the only thing I’d change about the driving position is the angle of the steering wheel. At the moment the top tilts away, lifting your shoulder blade off the seatback as you swing your arm over. Reach adjustment would cure it, but the Twingo doesn’t have it, underlining the car’s budget origins as surely as the brittle plastics and slightly tinny feel.

Otherwise Renaultsport’s influence rings solidly through this car, because it certainly doesn’t drive cheaply. Of course it helps that a large slice of the EU development pie seems to have been thrown at Northern Portugal’s road network, which sparkles smoothly in the early morning sun. Flattering they may be, but on these roads the Twingo drives like it has a point to prove. The Cup is grippy, incisive and clings on gamely – it’s an entirely different beast from the Sport we’ve dragged along for comparison purposes, which comes across as rather limp and bland.

Sure the Sport is more comfortable, but you don’t purchase a small, feisty hatch for its ability to smother bumps, and besides, the Cup, while stiff, also appears to be well damped. The suspension has a tightly controlled motion, packing plenty of absorption into little travel. In short it rides expensively.

Push hard and you will find understeer, but the way the Twingo pivots and changes direction with so little fuss means you don’t often breach the slip barrier. The ESP stability program is well judged, too. I don’t find myself searching for the off switch for ages – although when I do it takes a while to track down. It’s buried in a mid-shin-level hole under the dash – you’re most likely to stumble across it when trying in vain to bring the steering wheel out a fraction more.

Get the orange button glowing, pin the throttle (note the play, stop, pause pedal logos, an £80 option) and the Twingo is with you every step of the way. There’s a hunger for corners that’s invigorating – even if the steady trickle of information is fed back to you through the chassis rather than the steering. Electric power assistance is to blame, robbing the Twingo of true clarity. At least the helm is accurately and consistently weighted with a pleasingly quick rack – half a turn of lock deals with most corners, so you rarely need to shift your fists from quarter to three.

There are other perks, too. The brakes are meaty underfoot – developed for the far heavier Mégane, they’re reassuringly positive, and when the rev needle homes in on the 7000rpm limiter (and the tuneful 1.6 begins to sound just a touch ragged) the change-up light glows green. That’s green for go, grab another gear, give it some. It’s a small thing, but it matters somehow.

And that kind of sums up the whole car. The driving experience is more special than that offered by either the C2 VTS or Swift Sport and even though the Twingo would be more fizzy and interesting with 160bhp, I can see where Renault’s coming from, its need to conform to class standards. Think of it as diet Renaultsport, Renaultsport-lite. You really want the full-fat-with-cream experience, but you know this one is better for you.