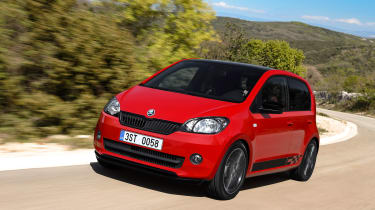 Skoda has infused its Citigo with some sporting flair, tweaking slightly the city car’s chassis, giving it a visual makeover and applying the Monte Carlo badge, which commemorates the Czech marque’s history in the famous rally.

The Citigo rolls off the same production line as the VW Up and SEAT Mii, with which it shares its platform. However, like the UP GTI and Mii FR, the Monte Carlo variant benefits from a more focused chassis setup.

On the outside, smart use of black exterior trim, including the chin-spoiler and the grille-surround, contrasts well against the red base colour for aggressive effect. Topping it all off are the black wheels and assortment of decals, which with the above combine to confirm the Monte’s sportier intentions. 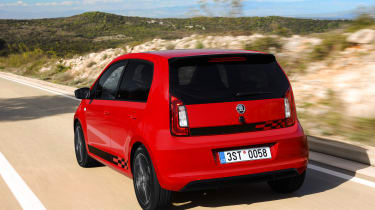 Inside, the Monte combines black and red again with two-tone seats, body-coloured door tops and a red transmission tunnel which brings some visual verve. As the highest specification Citigo, the Monte features bluetooth connectivity, a leather multifunctional steering-wheel and an SD card slot, which provides music storage, all as standard.

Skoda has lowered the ride height by 15mm (over the standard car) and fitted larger, 15-inch wheels to accommodate tyres that are both 10mm wider and 10mm lower in profile. All of the above constitutes the ‘sports chassis’ that works with the traction control system, which itself incorporates an electronic differential lock to improve cornering response and maximise road holding, according to Skoda.

In spite of the Monte’s sporty persona it’s fitted with the lower-output derivative of the 999cc three-cylinder engine, which develops 59bhp and 70lb ft of torque – giving away 15bhp to the more powerful application fitted elsewhere in the Citigo range. Furthermore, without the benefit of a turbocharger, you really need to rev the engine hard to extract all of the performance, with the respective peaks pegged at 5,000rpm and 3,000rpm.

In chasing the red line a gravelly thrum is emitted from the small, three-cylinder engine, but the revs climb at a slow and steady rate, in part, due to the five-speed transmission’s frustratingly long gearing. Clearly, the ratios are stacked in favour of economy – second gear will see you past 60mph and third past 90mph – which is ludicrous in a small, sporty car and significantly blunts performance.

So - you won’t find yourself rowing through the gears, which at least means less time dealing with the ‘box’s notchy, rubbery shift action, although it can at least can be rushed to avoid losing hard-gained forward momentum between changes.

It comes as no surprise the Skoda Citigo Monte Carlo posts tardy benchmark performance figures: the sprint from 0 to 62mph takes 14.4 seconds and it tops out at 100mph.

The Citigo feels engineered well-beyond what’s demanded of a city car; it’s surprisingly refined on longer journeys, even if you need to work the motor hard to reach and then sustain motorway speeds.

With the sport chassis there’s a fidgety edge to the ride quality — on all but the smoothest of surfaces, due largely to the reduced suspension travel. As a result the car bobs around a lot, more so at higher speeds and on broken roads, although it rarely feels truly unsettled.

On the plus side, the reduction in ride height means what little weight there is – 929kg –  is well-contained, minimising the sense of inertia under lateral loads. Furthermore, on turn-in, the Monte will grip gamely, allowing you to carry more speed through bends than you might expect.

Lean too hard on the front end, though, and you’ll be met by safe understeer and ESP intervention. While the chassis isn’t particularly adjustable then, a mid-corner lift does at least trim your line in the event that you're carrying too much speed through a corner.

There’s little-to-no feedback telegraphed through the flat-bottomed rim. However, the steering its accurate and light making the car easy to place, which is key to the fun that can be had in the Citigo.

Its narrow, foursquare form leaves you plenty of space on the road (within the confines of the white lines) to pick from a variety cornering lines. Plot the straightest one and you can really hustle the Citigo, which proves both enjoyable and addictive. You have to use every inch of tarmac and avoid heavy braking (where possible), taking full advantage of the featherweight Citigo’s diminutive footprint to safeguard precious momentum.

This driving style isn’t unique to the Citigo; it’s one often employed in performance cars of small power and light weight – and we’re big fans of this recipe. So the Citigo is never fast, but it proves, as many have before, that speed and thrills aren't mutually inclusive.

The Monte Carlo edition is available in three- and- five-door bodystyles, respectively priced at £11,320 and £11,670 to reflect its range-topping status; entry to the Citigo range starts at £8,785.

Both SEAT and VW offer their equivalents, mentioned above, on the same amalgamation of parts, with the Mii and the Up respectively. In FR-Line trim the latter is the Monte’s closest rival, riding on the same sports chassis, and priced from £11,675. Interestingly, for an extra £150 you can specify the more powerful, aforementioned 74bhp iteration of the three-cylinder engine.

As for the UP, the closest variant in price terms is the Beats model, which, as the name suggests, benefits from an uprated stereo as well as Beats-inspired design touches, inside and out. However, if you want sharper dynamics from the Up you’ll have to go for the £14k-plus, GTI.

Elsewhere, in Renault’s Twingo range offers  Play and Dynamique trims which sandwich the Monte Carlo price-wise. However, this side of the expensive GT model, the Twingo isn't as fun to drive as the Citigo.