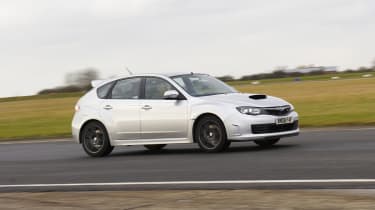 The transformation of our Impreza STI into the car we always wanted it to be continues apace. Last autumn, you may recall, we fitted the bigger, 18in Prodrive alloys and wider, lower-profile Michelin Pilot Cups in an effort to beef up its looks and sharpen up its handling. It worked too. The ride remains supple, but there’s a tad more turn-in bite and a little less squidge. It feels more broad-shouldered, tighter, more together. It certainly looks a whole lot meaner – we also added a small black STI splitter to emphasis its jutting, shovel-like chin.

So at last the Sub was starting to look and feel like the rally-bred road-eating weapon it’s supposed to be. Now – how to put some more fire in its belly, make it a little madder, badder and more dangerous to know? After all, these days 296bhp is barely enough for a hot hatch. Of course, if you want something completely barking, you need one of Iain Litchfield’s Type-20 Imprezas with an underpants-on-the-head 395bhp. But that’s an entirely different animal – its starting point is not the UK-spec car with its 2.5-litre flat-four, but the Japanese-market 2-litre zinger with its seemingly insatiable appetite for revs.

Anyway, with BN08 FAF being one of Subaru UK’s own cars, we couldn’t look at anything too outlandish. The official Prodrive Performance Kit offers a useful 29bhp gain, lifting the output to 325bhp, which means it matches the flagship 330S model (the 330 refers to Euro-style PS rather than good old British bhp). It’s not a cheap conversion at £1537, but you do get a new exhaust system from the cat back, to improve the boxer’s breathing and restore some of its old throb and bark, and a revised ECU. The other attraction is that the warranty is completely unaffected. And yes, many tuners offer their own warranties for engine work, but a manufacturer whole-car warranty is so much tidier come resale time.

Before it went in for the work, we attached the VBOX to find out just how fast our standard STI was. It had always felt rapid, at least since it loosened up at around 2000 miles – in fact the black 330S we had on eCoty didn’t feel much faster – but I was still surprised at just how rapid it was. 0-60 in 4.8sec is proper quick; in fact it’s Ferrari 288 GTO quick, as I might have mentioned to my colleagues, once or twice. 0-100 in 12.3 isn’t shabby either, and 30-70 took just 4.4sec. In fact I started to worry that it might not be significantly quicker after the conversion…

So in it went for its new mapping and hunkier-looking four-outlet Prodrive exhaust, and since it was almost due its second service, we had that done at the same time, adding £230 to the bill.

It took all of 200 yards to feel the difference. Where the standard STI has virtually instant wallop, a surging mid-range but a slightly limp upper-register, the PPP-equipped car takes a fraction longer to fill its lungs – but then fairly hurls you along the tarmac on a rising whoooosh of more obviously turbocharged horsepower. No, it isn’t subtle, but boy is it fun.

And the soundtrack? A lovely throaty burble would be the icing on the performance cake. Unfortunately that particular cake remains un-iced. From outside it sounds gruffer, but inside – and it might be down to the added road-roar from the Michelins – you hardly notice.

Never mind. I’m becoming rather attached to the STI. I like its shovel-faced brutality; I like the fact that it’s different. And now I love the way it goes too. I fear, however, that the cost might not be limited to £1537 –  I’ve only been driving it post-PPP for a week, and the average mpg is the lowest I’ve seen. Oh well. Did I mention that it’s actually faster than a 288 GTO now?