Snow meant we could test the Impreza's traction control, but it wasn't as expected 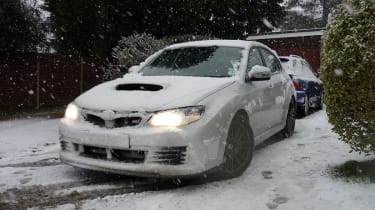 Four-wheel drive has always been a key part of the Impreza’s arsenal, but twice recently I’ve been given cause to question its worth. The first occasion was when I had the chance to drive the STI around a snowbound Bedford Autodrome. Disabling stability control and adding some rearward bias to the diff meant plenty of sideways fun, but there was barely any more grip and therefore barely any more speed than in our Grand Challenge MX-5. On snow, narrow tyres count for more than four-wheel drive.

Then I drove Autograph’s 300bhp Golf GTI turbo, and though it didn’t feel any quicker than the STI it did feel more involving, simply because there was a bit of tug and writhe in the steering. The Impreza gets its power down without drama but, partly as a result, it does feel a little remote.