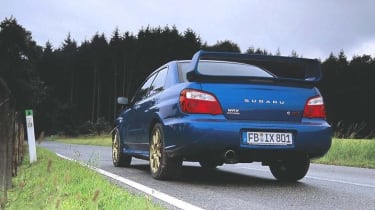 After years of lagging behind the most advanced Jap-spec Imprezas, the UK is finally attaining some parity. The 2005 WRX STi Type-UK has a chassis every bit as sophisticated, including all the latest detail upgrades, and goes on sale this month priced at £25,995, a grand more than the outgoing version. This appears terrific value, even though the Type-UK doesn't get the more efficient 315bhp flat-four engine with its twin-scroll turbo and tuned-length induction pipes that eradicate the traditional woofly boxer beat. However, right from the off you'll be able to order the PPP (Prodrive Performance Pack), which lifts power from the standard 262bhp to 301bhp and costs a fiver under £2000. Here at evo we're no strangers to this substantially re-worked chassis, having tried it in the Japanese Impreza Spec C. Indeed, we were so impressed we included a grey import Spec C in last year's Car of the Year (evo 063). The changes include a new front subframe that shifts the front wheels 15mm further forward, a thicker rear anti-roll bar, aluminium suspension arms and revised geometry all-round. It also rides on trackday-style Bridgestone RE070s, and the effect is to make the STi much sharper, both in steering and overall responses, transforming it into a car as incisive as Mitsubishi's Evo. That's just the start. As standard, the four-wheel-drive system gets all the good stuff. As well as a limited-slip diff at the rear, it has a fast-acting helical limited-slip diff at the front and a driver-controlled centre diff (dubbed DCCD) which allows the torque distribution to be adjusted between 35/65 and 50/50 front/rear. Over and above the established Spec C chassis, the 2005 chassis has a 15mm wider rear track and wider rims (up from 7.5 to 8.0in) with wider- spaced mounting bolts. This increase in what is technically known as Pitch Circle Diameter from 100 to 114.3mm comes as a result of fitting larger, stronger roller bearings for better wheel control. Also, 114.3mm is a more commonly used PCD that allows a wider choice of wheel for those rallying the WRX in Group N. It's the most comprehensive chassis overhaul the UK STi has ever had, yet the exterior hardly betrays this. There are new ten-spoke gold alloys and a flat edge to the rear wheelarch where it has been extended due to the increased track width. Inside there's a new silvered centre console and a more attractive leather-bound three-spoke steering wheel. You certainly know you're in a new-generation Impreza as soon as you're moving, though. The fat treadblocks of those racy Bridgestones tug and grab at every imperfection in the road and thrum along like off-road tyres. This is odd, partly because in the Spec C we didn't notice too much noise or distraction, and partly because we're in Germany which is renowned for its fine asphalt. There is more castor angle than before, too, producing stronger self-centring, so altogether the 2005 STi feels like a live-wire. No changes are claimed for the 262bhp flat-four yet this engine feels a little less peaky than before. The PPP upgrade was a must-have on the previous model but here the standard tune delivers lots of smooth power between 4000 and 7300rpm. While the chassis would certainly be enlivened by the lower, firmer delivery of the Prodrive upgrade, this STi doesn't need it to feel frisky and adjustable. In auto mode, the DCCD centre diff uses information from a yaw rate sensor to determine the torque split. It selects a free diff (35/65 split) on the entry to a corner - with less torque going to the front wheels turn-in is crisper - and when the power is applied at the apex it adjusts to up to 50/50 for maximum traction. It certainly works. In the damp conditions in Germany, the STi's nose hesitates only briefly (probably due to the lack of ultimate wet-weather bite from those Bridgestones) before scything keenly for the apex. Feed in the power and it hauls hard for the exit, all four tyres hooked up, the rear edging out fractionally. Select the split manually and you can throttle-steer out of corners, though that strong self-centring action can make rapid correction a little clumsy. No question, this is the firmest-riding, most hardcore Impreza ever to go on sale officially in the UK. The launch didn't give us enough types of corner and surface to know exactly how the new STi will perform on our own peculiar roads, but it's certainly closer in feel and demeanour to the Mitsubishi Evo than any previous UK model. The import Spec C was even closer with its potent, throb-free flat-four, but for me the off-beat warble is part of the Impreza's appeal. If you want Spec C power, the PPP conversion will get you close enough, for a total of £28K. That's a keen price, no doubt set with the new range of Evo MRs in mind, and makes the overhyped Impreza WR1 look overpriced.