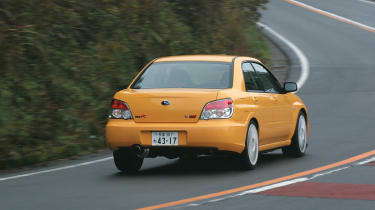 Can you imagine being a fly on the wall in the design-brief room at Subaru when the order was given to build the Impreza WRX STI Spec C Type RA-R? STI president Masaru Katsurada sits his team down and sternly says, ‘No more pussyfooting around with half-baked attempts at creating the ultimate drivers’ STI. Come on lads, go all out. Create a car that can be thrashed at the track, but can still be driven home.’

As the very last iteration of the current-body STI before the all-new Impreza lands next summer, Subaru wanted to go out on a high. So it threw out all of the unnecessary creature comforts – like the £2200 Recaro seats – and focused on just one thing: handling. And the result is stunning.

As well as offering huge 18in STI rims, sticky Potenza RE070 rubber and special paintwork, the RA-R is the first Japanese production car ever to pack Brembo monoblock six-piston callipers on the front and a four-piston set-up at the rear. Closer inspection of the calliper covers, however, reveals the letters ‘STI’ instead of the word ‘Brembo’, which is unusual given that the one-off brake rotor design featuring unique heat-dissipating grooves was specially built by Brembo for the RA-R.

The groove pattern on the discs resembles that seen on the Prova Impreza STI race car currently competing in Japan’s Super Endurance series, and this road-going brake package is as close to racing brakes as you’ll get. You only need to approach the first corner at speed to work that out. Like race brakes, they need to be warmed up; enter a corner cold and you risk flying straight across and into the guard rail, but spend a couple of minutes leaning on the pads and you won’t find better stoppers anywhere. At operating temperatures, these brakes are outstanding, boasting firm pedal feel, tremendous stopping power and no brake fade. Just right for track days.

Employing one of the longest names in the car world, the ‘RA-R’ part is short for ‘Record Attempt – Racy’. Yes, really. And racy it is, inheriting its turbocharged 2-litre boxer engine from last year’s Japan-only STI S204 limited edition. That means 316bhp and a healthy 318lb ft of torque thanks to a remapped ECU, a larger, twin-scroll ball-bearing turbo, an intake duct streamlined with reinforced silicon rubber and an exhaust system tweaked for better response at lower revs.

The end result is bags of bottom-end torque when you most need it (coming out of the corners), a subtle ‘whoosh’ from the turbo accompanying a rapid ramp-up in power. The RA-R spools-up instantly from as low as 2000rpm and stays on the boil right up to the 8000rpm red line. Just right for tight race tracks.

More impressive than the RA-R’s power delivery, though, is its cornering ability. Wanting to make this the best cornering STI yet, engineers strove to dial out the car’s lingering understeer at the limit. By adding modified inverted struts, ‘lowdown’ springs, ‘pillow ball’ bushes and thicker anti-roll bars, the RA-R turns-in sharper and faster than any STI to date, following your intended line with absolute precision. Jump on the brakes and lean on the sticky Bridgestone rubber as you turn in and you’d better be ready with a dash of opposite lock. That’s how eager the rear is to come round. Corner below the car’s adhesion limits, though, and you’d have to go a long way to find a four-wheel-drive car that rewards a driver as much.

But while that firm suspension set-up is perfectly matched to rocketing around tight corners, it also means the RA-R is not an everyday commuter. Extended cruising on bumpy roads can dislodge your eyeballs. In its element, however, there is no four-wheel-drive more rewarding for the price.

In Japan – the only market where the RA-R will be officially available – that price is just over 4.2 million yen (£18,000) a pop. And of the 300 RA-Rs being built, STI tells us that more than 270 have already found owners. But that’s what happens when you make something this special. It disappears, fast.