With a Spec C chassis and the option of a four-door saloon version is this a return to form for the (Impreza) WRX STI? 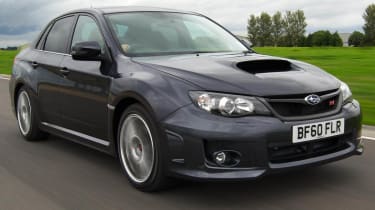 New 2011 Subaru WRX STI four-door saloon (note it’s not an Impreza anymore according to Subaru – that name will reappear on a car with less sporty connotations apparently. Seems odd to me, but there we go). The five-door hatchback will still be available alongside the saloon.

Power and torque remain the same at 296bhp at 6,000rpm and 300lb ft at 4000rpm. However, the chassis has been thoroughly updated and now uses the Spec C suspension. This sees, amongst other things, spring rates increase by 15.6 pere cent on the front and a huge 53 per cent on the rear. The centre diff is now seemingly more adjustable than ever with three Auto modes and a manual mode which offers six levels of adjustment. Also the VDC system (Subaru’s version of ESP) now has three modes – ‘On’, ‘Traction’ and ‘Off’.

There’s much more connection through the steering and a lot less roll so the two key areas where the previous car fell down have definitely taken a step forward. There is still a certain lightness to the steering around the straight ahead, but the tautness of the Spec C chassis now allows you to place the car much more accurately in a corner and the whole car loads up and inspires confidence with more immediacy. It’s perhaps not surprising that the ride has suffered a little so that it is now pretty firm, but it just rounds off the bumps well enough not to be uncomfortable. One other side effect of the increased firmness is that the new car feels slightly more susceptible to cambers – the steering wheel tugging in your hands as the nose wants to follow them.

The gearshift is still short and direct but is slightly slicker in its action, which is nice. Auto ‘minus’ seems like the best of the Auto settings for the diff so far but I will know more, I suspect, after a lengthier drive and a visit to the Croix en Ternois circuit tomorrow…

Overall it is definitely an improvement, and it still has that lovely involving, gritty Subaru quality to the experience as opposed to the more flighty sensation of an Evo. Oh and the engineers have even managed to get a welcome bit of warble back into the exhaust note.

The price has risen significantly to £32,995 (up from £27,590) which Subaru has put down to the exchange rate between the Yen and the Pound. This takes it above the level of a Mitsubishi Evo X FQ-300 although if you add in the Mitsubishi’s SST gearbox the positions are reversed once more. Given that the last generation WRX STI beat the Evo X it would seem likely that the new improved WRX will do the same, unless Mitsubishi improves its steering…

Fantastic Recaro seats come as standard on the new WRX STI and 18in wheels are also now standard. But while four doors may have made a comeback, you won’t be able to get those wheels in gold and WRX Blue has been replaced by Plasma Blue.

News of the new Subaru WRX STI is here