evo has driven the ultimate version of the retiring Subaru Impreza, with 312bhp and race-derived suspension 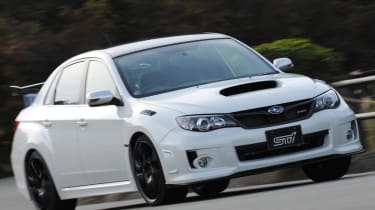 This is the fastest, best handling Impreza WRX STI that Subaru’s in-house tuning department has ever produced, but you can’t buy it. That’s right, it’s yet another one of those very special STI limited edition numbers – they’re only making 300! - built exclusively for domestic consumption, although we are sure that several examples will eventually find their way here to the UK as grey exports.

First seen at the recent Tokyo Motor Show, deliveries of the S206 will start in early 2012.

You know you are in for something quite special when the person greeting you at the test drive session is none other than STI’s motorsport director, former chief test driver and Nurburgring meister, Hideharu Tatsumi.

Smiling confidently, he opens the door to one of only 100 NBR Challenge Package models, a super rare edition built to celebrate STI’s monumental class win in this year’s Nurburgring 24-hour race. With its unique 19-inch BBS rims and hard-core carbon fiber roof and rear wing, the NBR certainly looks the part.

Power from the turbocharged 2-litre boxer four is up from the stock WRX STI’s 302 bhp to 312 bhp while torque increases from 290 lb-ft to 318 lb-ft. The engine is hand-built, with pistons, connecting rods, and crankshaft all balanced meticulously before assembly. The secret to the 206’s improved performance comes from the newly fitted low friction, twin-scroll ball bearing turbo, a remapped ECU and a low back pressure exhaust system that boosts low to mid-range torque.

Find a used Subaru Impreza for sale on the Classic and Performance Car site.

As we launch ourselves out of the blocks, the S206 feels at once perfectly poised and ready to play. Switching the VDC to ‘S plus’ for maximum throttle response, and with the updated DCCD (driver controlled centre diff) left in normal mode, we gun the boxer engine in first and second to record a stopwatch-timed 0-60 mph sprint close to the official claim of 4.5 seconds.

Compared to the current WRX STI, the S206 displays beefier torque between 3200 and 4400 rpm, just where you need more herbs for quicker corner exits. Zeroing in on a tight right-hander in fourth at 100mph, we scrub off 50mph in barely a second by jumping on the 6-pot Brembos, pop the notchy 6-speed gearbox down to second and turn in. Woah.

It almost defies logic. How can you make an Impreza WRX corner with so little roll, maintain so much lateral grip and yet retain such comfortable ride quality? It can’t just come from the specially fitted Bilstein inverted dampers, coil springs and tower bar.

Back in the pits, Tatsumi lets on that his team has brought across some ‘little secrets’ from the STI race car, which they are preparing for a second Nurburgring 24-hour challenge in 2012.

‘It’s not just the flexible tower brace and Bilsteins that create this ride,’ he says, ‘I have brought over a flexible draw stiffener, several other nifty support braces and special lateral links with pillow ball bushe.... Oh yeah, and one addition that even surprised us was the carbon fiber roof which not only improves upper body rigidity while reducing weight, but helps to improve the overall ride quality.’

We can’t argue with that because the ride quality is exceptional – firm but compliant - for a hard-core sports model like this with low profile 19-inch tires.

The combination of the suspension upgrades and the high grip Michelin tires also meant that his team was able to dial back the steering gear ratio from 13:1 to 15:1, which makes the S206 turn in at speed as predictably as the actual race car, with logarithmic loads of grip and more steering feel and feedback than any STI before it.

This car begs you to push it harder each lap. Your insides just about reach their lateral limits before the tyres reach theirs.  There’s almost no understeer and the rears won’t let go either.

So the question begs. Why don’t STi offer an export model, even a very limited edition run? According to Tatsumi, there are two reasons. Firstly, even with two catalysers fitted to reduce CO2 and NOx gases, the S206’s emissions won’t quite meet current international standards. But more to the point, the ballistically strong Japanese Yen means that this car would costs the equivalent of £55,000 in Japan, putting it in price contention with the Audi TT RS, Porsche Cayman R and BMW M3 – a surcharge it would struggle to justify with the additional costs of getting it to the UK.

Tatsumi regrets not being able to supply this car to the UK, even in small numbers. Deliveries are due to start in January in Japan, but the full lot of 300 (200 stock and 100 NBR editions) has already sold out, although word has it that dealers still have a few up for grabs. So if you want one, you’d better jump on a plane as soon as possible because these last editions won’t last long.

But, as Tatsumi says, ‘if you want to drive this car, you’ll have to come to Japan.’