Not as hardcore as we've come to expect, but a cracking car nonetheless 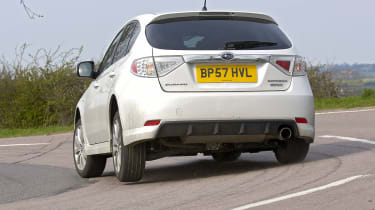 It’s finally sunk in what the WRX is all about. Stealthy speed. Time and again I’ve had sharply dressed young dashers in various turbodiesel Audis and BMWs line up what they imagine is going to be an easy overtake as we enter a stretch of dual carriageway, only for the anonymous-looking Impreza to pull effortlessly away. It’s just like turning the clock back to the early days of the turbocharged Subaru, before the big wings and gold wheels, when those plain-looking saloons and wagons had this same genuine Q-car ability to shock with their performance.

For performance is the one thing the WRX is most definitely not lacking. The 2.5-litre flat-four is not the sort of engine you need to wring out; rather you select a gear higher than you normally would for any given corner, floor the throttle slightly early to allow the turbo to fill its lungs, then thump out onto the straight on a wave of effortlessly deployed torque.

At seven or eight tenths the WRX is just a tad wallowy and understeery, though if you’re happy to turn off the stability control and throw it into a corner at what might appear to your passengers to be slightly optimistic entry speed, then it’s still possible to summon up some pretty photogenic angles. Hard on the power, and the Subaru’s diffs do their torque-juggling stuff as well as ever. All-weather, all-surface traction is what the WRX has in abundance, and where it can still embarrass even one of the more accomplished of the new generation of big-bhp front-drivers.

Unfortunately you pay for all this at the pumps – I’ve struggled to hit 25mpg even on my regular commute, where my old BMW 335i Touring with its 3-litre twin-turbo straight six would regularly top 28mpg. Otherwise the WRX is proving utterly reliable and painless. Small annoyances include a faint whistle from the turbo while cruising, like a radio that’s not quite tuned in, and an aircon system that’s like an old-fashioned shower – either icy cold or piping hot, and seemingly nothing in between. The ride’s consistently good, refinement acceptable but nothing special. The cabin ambience is only so-so and the quality of some of the fixtures leaves a little to be desired – the luggage cover broke early on – but the stereo’s got a decent thump to it, and I haven’t even missed satnav.

What we have missed, and we may have mentioned this before, is the sort of feedback through the steering and the all-of-a-piece body control that encourages you to always take the long way home. That and a chunk of the slippery thing we call character, the stuff that made old-school Subarus so appealing. Oh yes, and bit of attitude in the styling: it’s a thin tightrope to walk between being Q-car anonymous and just a bit soft and bland.

Problem is, the WRX badge brings with it a lot of expectations that this Impreza can’t quite fulfil. Which isn’t the same as saying it’s a bad car. It’s just not quite the car you might have been hoping it was. If they’d called it a ‘Sport’ or a ‘GX’ or something, we’d have given it a much easier time.

So there you go. If you appreciate good value, and you want some stealthy speed, buy the £20K WRX. Fortunately for people like us who prefer our Subarus to be a little more hardcore, to have a bit more attitude and a lot more soul, there’s another new Impreza that’s more to our taste. We’re about to swap our WRX for an STI, and I have a feeling we’re going to get along rather well…