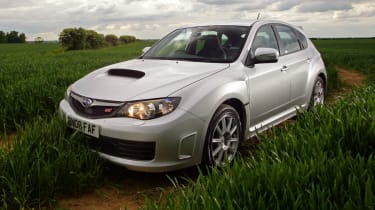 Up to now, I think it’s fair to say we’ve been a bit nonplussed by the new Impreza range; not quite sure what it stands for any more. But the moment our WRX STI Type UK scrunched up outside, silver paintwork glinting on its sharply boxed arches, it hit us. It’s just a rally weapon – civilised and refined for road use, now hatchbacked for compactness and added versatility, but a weapon nonetheless. And sexy with it. Several have commented that the wide-arched STI has the spirit of the Integrale, the coolest hatch of all, and to my eyes there are shades of Sport Quattro too. Whatever, this was lust at first sight.

How very different from the WRX, which we’d been running for the last three months. Where the WRX was amorphous and apologetic, the STI looks chiselled and confident. The colour helps, of course. Pearl white is fine for a fridge or a set of dentures or (at a pinch) a Honda, but silver is the colour of blades and machinery. The difference is in the detailing too: the small vents (even if they appear to be dummies) in the trailing edges of the front arches; the slender-spoked alloys and glossy black calipers clearly visible within; the four steel tailpipes poking out from the rear diffuser. The front grille is now a matt-black mesh, which looks meaner, but it’s also shallower – there seems to be an awkward gap between grille and bonnet. Pop the bonnet and you see why it’s been cut down – there’s new induction trunking leading to the airbox, so suddenly the awkward gap is cool. In fact the whole engine bay looks terrific, with red crackle-finish manifolding between the intercooler and the 2.5-litre boxer engine, which in STI guise thumps out 296bhp to the WRX’s 226.

The drivetrain, too, is seriously trick. As a couple of readers have rightly pointed out, the STI does not have the WRX’s viscous coupling in the centre differential. It has a far faster-acting planetary diff with an electro-magnetically controlled clutch pack. Oh yes. What’s more, the driver can select the torque split manually, or leave it in auto and let an ECU do all the juggling based on inputs from yaw, pitch, steering angle and throttle position sensors. There’s a six-speed gearbox too, in place of the WRX’s five-speeder.

The suspension is basically the same, but with uprated bushes and retuned dampers; the wheels are still 17 inches in diameter but they’re an inch wider and shod with 235/45s in place of the WRX’s modest 205/50s, Dunlop SP Sport 01s on the STI. The steering is still a speed-sensitive system but the STI has what Subaru calls a ‘fast rack’.

How does all this feel on the road? Terrific, actually, and substantially different to the WRX. While the steering still isn’t big on chat, it does feel more direct and slightly weightier, which inspires more confidence when you’re attacking an unfamiliar road. The ride has lost its soft edges, so you feel the bigger tyres thumping over drains and jiggling over rumble-strips, but the upside is a tauter gait, sharper turn-in, less pitch and roll, and reduced understeer.

The powertrain is similarly improved. With the throttle set to Sport Sharp and the engine now thoroughly run in, there’s a fantastic depth and reach to the performance. The STI just eats up tarmac. The WRX was quick all right, but this is another league. And the six-speed ’box has a much more solidly engineered feel, a real weight to it.

Even the cabin ambience is improved. The dash is still a bit plasticky, but it’s amazing how high-back winged seats trimmed in Alcantara, together with the extra switchgear in the centre console for the diff settings and throttle maps, add to the general air of purposefulness. Whether the diff options are genuinely useful or a bit of a gimmick I hope to find out on a trackday or two very soon.