Our Impreza takes to the track at the Bedford Autodrome 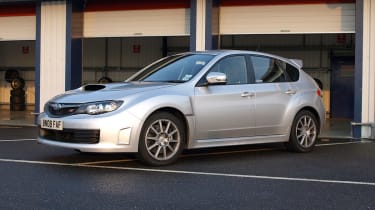 It’s one of those immutable facts that most road cars feel a bit soft and slow when you take them on track, so how would the STI cope with a trackday or three? No worries about its pace – now that it’s fully loosened up it feels explosively quick – but even though it’s considerably stiffer of sinew than the WRX we ran previously, it’s still not the sharpest of tools in the handling department. Well, nowhere better to find out than the Bedford Autodrome, and with two evo trackdays there ringed on the calendar, I was looking forward to balmy summer evenings spent in the company of the best people on earth (evo readers, of course).

Actually the first one wasn’t very balmy; in fact the heavens opened just in time for the start, so when the assembled cars ventured out, most of the rear-drivers were, understandably, tiptoeing around. It’s at times like this that I’m rather pleased to have all four wheels digging for grip. All the same, I decided to leave the switches for the STI’s diff settings well alone; ditto the button to disable the VDC stability control, at least for the first few laps.

I’d expected the STI to feel a bit understeery, because that’s how it feels on the road, but in fact it felt pleasingly neutral through the quicker corners, and if it did start to plough on through the slower, tighter corners, a slight lift was all it took to get the nose back in line. It was even possible to get the back end sliding out of the Hangar Hairpin. Which was nice.

As the circuit dried and I could begin to get rather more brutal with the throttle, the VDC telltale light began to flicker more regularly. A press of the button tucked away down low on the right side of the dash loosens its grip – holding it down for two or three seconds cancels it completely – and then it’s just you and the 4wd hardware. The centre diff can be tweaked via switches in the centre console to give more rearward bias, but I’d be lying if I said it transformed the Impreza, not in my hands anyway. ‘Auto’ seems to strike a very good balance. VDC off and throttle set to Sport Sharp, the STI’s fast and plenty of fun. Yes it still rolls a bit, certainly more than an Evo, which also has sharper steering responses, but there’s an honesty and transparency to the STI, a kind of analogue feel, that’s very appealing.

Despite two trackdays, the fuel consumption’s still hovering around 25mpg, at least according to the dash readout, and I’ve only had to add about half a litre of oil in 6000 miles.

The STI’s only weak point proved to be its brakes. After a couple of 15-minute sessions the pedal was feeling a touch soft and the discs were starting to rumble in protest. But then the South West Circuit, which we’ve been using for all our Bedford trackdays, is pretty hard on brakes, not least at the end of the main straight, where the STI was topping an indicated 135mph.

That’s not the fastest it’s been though. Harry Metcalfe, no less, has seen an indicated 155mph. Like I said, there are no worries about its pace…