If you like the Golf R and don’t mind SUVs, you’ll probably like the Volkswagen T-Roc R too 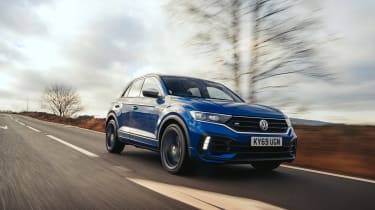 Volkswagen’s T-Roc - a crossover, SUV or CUV (compact utility vehicle) depending on your preferred definition - has become part of the furniture over the last few years, even sneaking into top-ten best-seller lists every now and then.

As it’s based on the same platform as the Golf, it’s no surprise that most mechanical parts carry straight over - and as sure as the sun rises, this means we now have the T-Roc R: all the best bits of the Volkswagen Golf R, installed in the taller, more practical T-Roc body.

SUVs are a touchy subject among car enthusiasts and performance SUVs even more so, but with the Golf R still going strong years after launch, can its talents be carried across unscathed to its high-rise sibling?

We’ve seen the combination many times before, and in this iteration it’s good for a 0-62mph time of 4.8 seconds, and a true top speed (not an electronically limited one) of 155mph. The acceleration time is just a tenth slower than the Golf R, though if the R’s electronics were uncorked, it’d likely achieve a higher top speed by virtue of better aerodynamics. 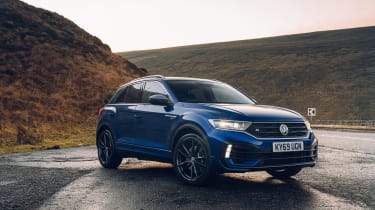 Mechanically similar to the Golf R the T-Roc R may be, but Volkswagen has made subtle changes to the SUV’s underpinnings to ensure it’s worthy of the R badge, despite its extra height and weight.

The biggest change has been to adjust the Haldex clutches so they deliver power to the rear wheels with more urgency - the idea being that with a more rear-biased setup under acceleration, the T-Roc claws back ground in terms of agility that it loses from its greater mass.

VW has also fitted an aluminium subframe at the front for lower weight and extra stiffness. It’s an item that Golf GTIs get, but the Golf R curiously doesn’t. The brakes, too, are directly from the Performance Pack version of the Golf R, with new pads again aimed at mitigating the car’s extra bulk. A titanium Akrapovic exhaust system is optional.

It’s not earth-shattering news to report the T-Roc R drives not unlike a slightly taller and slightly heavier Golf R. There might only be 50kg between the pair (1575kg plays 1525kg) but the T-Roc R’s higher centre of gravity slightly blunts its responses to acceleration, braking and steering inputs.

The T-Roc R’s shortcoming against a Golf, or any hot hatch for that matter, is that it feels like you’re sat on the car rather than in it. It means you never feel confident to push as hard as you would in a hatch because you feel a step removed from what’s happening beneath you. You’re less connected, have a lower level of engagement with how the Roc R gets in, through and out of a corner. There’s too much ‘hold on and see what happens’ for us.

It doesn’t step off the line quite so smartly, either, and needs to be in Race mode to deliver the force of that 296bhp. It also needs more pedal pressure to bring it down from higher speeds. And where a Golf R allows you to establish a flowing rhythm you always feel busy in the T-Roc, and at times there’s very little extra reward for the additional effort you are having to put in.

The ride is more unsettled than in a Golf (hatch or estate), with a constant low-frequency buzz that affects all SUVs no matter their size as they try to counter their increased ride heights with the extra weight. Optional DCC adaptive dampers deliver a firm ride, but no more so than the Golf equivalent when in Comfort mode, but you’ll want to steer clear of Race mode for the dampers on the road (the car’s Individual mode allows you to select different modes for engine and damping) as their setting is far too stiff to offer any performance advantage.

Wind the T-Roc R back and drive within its limits and it’s a pleasant enough car to cover distance in along an interesting road. But it’s unlikely you’ll ever step from it replaying the drive in your head.

It’s worth noting that even with the Akrapovič system, the T-Roc R’s mechanical noises aren’t much to listen to – the burble at idle is nice, the drone higher in the rev range less so. But performance is still strong, the DSG still shifts cleanly and quickly, and the brakes still feel strong, though a little more pedal feel at the top of its travel would be nice, just for that extra reassurance. Oh, and while the cabin is broadly similar to the Golf’s, and has a little extra space, the materials do feel a touch cheaper. 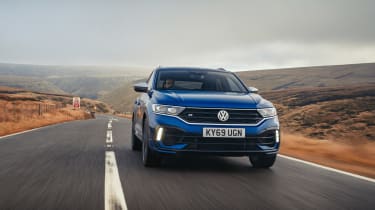 It’s worth noting that even with the Akrapovic system, the T-Roc R’s mechanical noises aren’t much to listen to - the burble at idle is nice, the drone higher in the rev range less so. But performance is still strong, the DSG still shifts cleanly and quickly, and the brakes still feel strong, though a little more pedal feel at the top of its travel would be nice, just for that extra reassurance. Oh, and while the cabin is broadly similar to the Golf’s, and has a little extra space, the materials do feel a touch cheaper.

The argument for or against the T-Roc R’s existence could be as much a philosophical one as it is an objective one. While it doesn’t drive as well,  nor is it as engaging, as a Golf R hatch or estate, there are some who will be drawn to the T-Roc R because of the sector it sits in. For us, we’re more concerned about how a car drives, which is why the Golf equivalent still remains our R of choice.

The Volkswagen T-Roc R starts at £38,450 in the UK and is available now. That price puts it around two grand more than a five-door Golf R, and actually a little more than the £37,370 Audi SQ2 which is effectively the same car. For driver appeal, it sits somewhere between the two, but much closer to the impressive Golf R than the overly firm-riding and slightly personality-free Audi.