The new seventh generation VW Golf is set to be one of Europe's biggest selling cars - does the top-spec diesel version deliver any driving excitement? 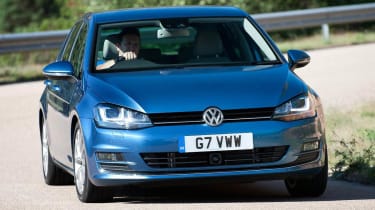 The hottest diesel version of the new, seventh-generation Volkswagen Golf, meaning it’s the one that everyone is likely to buy instead of the sweet petrol-powered GT TSI that we’ve already driven.

Now on sale in the UK, the GT TDI costs £24,880 in five-door form, when driven with the six-speed twin-clutch DSG gearbox our test car arrived with.

Despite looking very similar to the outgoing mk6 Golf – which was itself just a rehash of the 2004 mk5 – the mk7 is an all-new car, and one based on Volkswagen’s very clever (if slightly boring) MQB platform. That means it’s a mechanical cousin of the new Audi A3 and Skoda Octavia – plus numerous other soon-to-be-launched models from the vast VW empire.

This means the new Golf is both lighter and stiffer than the old one, with better economy and fairly comprehensive standard equipment – including things like active cruise control on top-spec versions like this GT.

Impressively well, in a thoroughly sensible fashion. Indeed, after spending several days in it, it’s hard not to conclude that the mk7 is as big as step forward as the mk5 was when it was first launched.

Downsides? Well, this diesel engine isn’t the quietest, especially when asked to provide overtaking punch. It’s thrummy soundtrack fills the cabin under full throttle, and emphasises just how refined the Golf is most of the time. And there is an obvious solution in the form of the cheaper, sweeter TSI petrol.

Chassis settings of the GT have been selected for comfort rather than all-out response. It rides extremely well on British tarmac, with the body staying composed over rougher stuff. Cornering is flat and composed, with the new electric power steering system combining quick responses with decent feedback – it feels similar to the mk6 GTI’s rack. Grip levels are good and, although the Golf fades to predictable understeer at the limit, cornering line can be tightened with an eased throttle.

The GT is definitely warm rather than hot – but it’s fair to say the basics are definitely in place to make the forthcoming GTI a proper contender.

Although the 2.0-litre TDI will outsell the TSI by a considerable margin throughout Europe, we’d put in a word for seriously considering the petrol car. The new TSI is far better than the old one, with a sweet-spinning engine, decent pace and – on our experience – over 40mpg in mixed driving. Yes, the diesel is far more economical – we managed 52mpg on a rapid motorway run – but it’s nowhere near as sweet to drive.

Sadly the GT gets a standard electric handbrake in place of a proper ratchet one. It’s as irritating as such systems always are, and also removes the possibility of a good old-fashioned handbrake turn. Boo, hiss.