Supercharger takes V8 Vantage to over 500bhp, but it’s no match for a V12 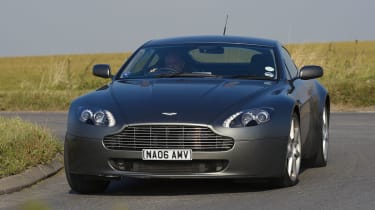 A plaque bearing the name of the man who originally built this Aston Martin Vantage’s 4.3-litre V8 sits proudly on the front of the engine. ‘Andrew Gough’ it reads. We notice it when we lift the bonnet to get some snaps of the car’s defining feature and photographer Chris Rutter turns to me and says, ‘Do you think he’d be happy about what’s been done to his engine?’

I’m not sure to be honest. This V8 has undergone some pretty invasive surgery that has fundamentally altered its character, turning it into a rival for the 510bhp V12 Vantage if its creator’s claims are to be believed. Berkshire-based tuning and styling specialist Paramount Performance (www.paramount-performance.com) has plenty of experience working on Astons and in response to customer demand has employed the supercharger experts at GMR to help develop this, the Paramount 500.

Available for both the 4.3 and the later 4.7 Vantages (with even greater returns), it’s a very professional installation. Sure, the main pulley belt has to do a bit of ducking and diving, but the supercharger itself (an Eaton TVS) barely takes up any more room than the standard car’s airbox and there’s plenty of engineering nous in evidence – it’s ages before I spot the slim raiser plates on the suspension turrets that lift the strut brace out of harm’s way, while the supercharger’s water-cooled set-up means there’s no need for a bulky intercooler (you do, however, need to remember to top up the built-in reservoir occasionally).

Nevertheless, liberating an extra 150bhp without beating panels or cutting any extra holes in the bodywork strikes me as a real achievement. So what effect has it had? Unfortunately our test car wasn’t quite the full ticket – the team is having difficulty getting the supercharger’s ECU to piggyback the car’s black box, and the niggles still hadn’t been ironed out for a second drive before we went to press. As it stands, the Paramount 500 shows masses of promise, although the tendency to stall, fuel starvation, an overly sensitive throttle and valve timing that kicks suddenly at 4500rpm rather than being fully variable all need attention too.

The supercharger itself is great, though. It’s very quiet in operation with a pleasingly insistent swell of torque, and up towards the top end you’re left with no doubt that it’s good for over 500bhp – it feels every bit as rapid as the V12, hurling itself over the Lambourn Downs. There’s a similarly elastic delivery too, although initially there’s a sense that the supercharger is building up a head of steam before it reaches some sort of critical mass and really gets going. I’m not sure if it needs to be quite so loud, though – the new exhaust (aimed at the US market) is obnoxiously shouty.

The chassis handles the power OK, but the driving experience doesn’t have the rich, velvety texture of the V12 Vantage and I doubt it ever will. At the moment the £15,000 upgrade cost looks steep, but with used V8s now dipping below the £50K mark, you could have, say, 75 per cent of the V12 for 50 per cent of the cash.