'Fast', 'agile' and 'diesel' in same sentence shocker - the Audi A5 springs a surprise 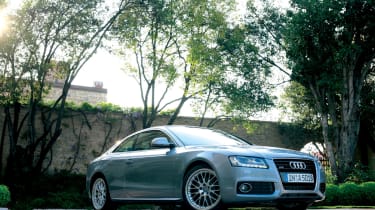 You probably read our report on the Audi S5. My task is to report on a lowlier version, and it’s significant that evo’s central editorial planning department suggested I try the Audi A5 3.0 V6 TDI quattro.

Why so? Because it cements the notion that a turbodiesel is a viable engine in polite performance society. So it should be, with a petrol-competitive 237bhp on offer from its 3 litres, not to mention a riotous 369lb ft of torque (a neat 500Nm, if we’re talking euros rather than sterling). And there’s also the sneaking notion that the V8-engined S5 isn’t quite the focused driving machine it should be. It’s a car of confused identity, neither hard-edged hot coupe nor convincing grand tourer. Maybe the TDI approach will make more sense.

There are three main things wrong with the A5 idea. Here’s the first. Compared with other Audis with front-mounted, longitudinal engines, it has a revised disposition of major components. The differential is now between the engine and the clutch, which brings the front wheels forward to the benefit of weight distribution and looks, and the lower-mounted steering rack is connected to the front wheels by shorter, less flexible steering arms. Yet, to drive, the A5 – and S5 especially – still has the nose-heavy, inert feel the new chassis was surely intended to eradicate.

So, what happened? Dr Horst Glaser, Audi’s dynamics chief, is clearly annoyed. ‘I agree with you,’ he says, ‘but the marketing people insisted it was this way so the A5 would feel familiar to Audi buyers.’ What about those buyers Audi seeks to steal from BMW, then? ‘I hope we can change it gradually,’ Dr Glaser replies, ruefully.

Snag two is that the A5 is unnecessarily big for a car with such meagre rear room. It feels bulky as a result; the forthcoming A4 saloon, which shares the new platform, will be narrower.

And then there’s the way it looks. Take one Audi Nuvolari concept car (Geneva 2003), take away the metallic, technical look with its taut lines and constant-radius curves, add a flabby waistline and confuse the curve in the rear side window, and you have a bland car which throws away much that Audi design has been working towards for years. Styling chief Walter de’Silva says it’s the most beautiful car he’s ever created. So much for the fusion of Bauhaus and the Italian carrozzeria legacy.

But here I am, driving the 3.0 TDI on mountainous roads near Verona, and I’m having an increasingly good time after my earlier dismay at the S5. Overladen Fiat Ducato truck occupying a short uphill straight? Stay in third gear, foot down, surge past as the torque sluices forth. Hairpin bend? Second gear, foot down again, wait but half a second, exercise the rearward-biased quattro drive for a full-traction explosion from the exit. This is a fine machine for mountain roads.

The engine sounds good, too, obviously powered by compression ignition, but deep and cultured of its type. Also, this car is riding on less aggressive suspension than the S5, so it’s more supple and fluid and the nose-heaviness is better masked. All this is good for the mood; I’m warming to this A5, enjoying its solidity and quietness and real-world eagerness. It will hit 62mph in 5.9sec, after all. Significantly, that’s a better time than the 3.2 petrol V6 quattro, which needs 6.1sec.

I also drove a front-drive Multitronic 3.2, whose CVT transmission is un-CVT’d by endowing it with eight distinct, virtual ratios. The result is a transmission with a shift speed approaching a DSG’s and a similarly pause-free torque delivery; it works better than Mercedes’ seven-speed or Lexus’s eight-speed torque-converter transmissions because the shift action and sense of mechanical connection are much more definite. The front-drive A5 also has a lighter touch into corners, as does a TT 2.0 relative to a 3.2 quattro.

The 3.0 TDI is the pick of the A5s, though. Now, will the marketing suits please listen to Dr Glaser?