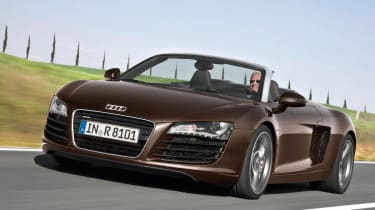 The V8-engined version of the Audi R8 Spyder. It could be described as a niche filler (from the company that finds niches in a seemingly solid wall of product) but we see it as potentially the best R8 you can buy. How so? Well, the original R8 Coupe with the 4.2-litre V8 is arguably the sweetest of R8s, but the V10 Spyder that arrived last year proved even better than the V10 Coupe, with dynamics as solid and sorted and even more character and appeal with the roof stowed. It costs £95,545.

It might be around 100bhp and 80lb ft down on the 5.2-litre V10 but, heck, the V8 still has 424bhp (up 10bhp compared to the launch Coupe) and 317lb ft of torque, and revs to an exhilarating 8500rpm. Here, it’s mated to the six-speed manual gearbox, which doesn’t sound like a technical highlight when the R-tronic automated manual is offered but trust us, it delivers one of the most tactile, slick and satisfying shifts in production.

One reason the R8 Spyder is such a close dynamic match for the Coupe is that it is an all-aluminium ASF (Audi Space Frame) design, like the A8 exec saloon. This means that the strength is in the superstructure, not the panels, and the Spyder has been designed to be exceptionally rigid without a roof.

Simply outstanding. It’s a fantastically poised and dynamic mid-engined car that blends inspiring, absorbing dynamics with suppleness, and this despite it lacking the effective dual-setting magnetic dampers of the V10. The V8 Spyder weighs 60kg less than the V10 model, and when you tack keenly into a corner, it’s quite obvious that a chunk of that saving is behind you. So while its steering is not quite as crisp as the V10’s, its chassis has a better overall balance.

It’s plenty fast enough with the high-revving V8, too, and what a marvelously smooth, characterful and exciting engine it is. The only slight disappointment is that its sound doesn’t expand and envelop you as much when you drop the electric fabric roof (or the teeny rear screen) as the V10’s does.

Loses very little in terms of integrity and thus dynamic alacrity compared with the Coupe and feels more naturally dynamic than the V10. And given that the V10 Spyder saw off the Ferrari California, Jaguar XKR and 911 Turbo in last year’s group test (click here), the V8 Spyder looks a bit of a bargain: at £96k it costs £20k less than the V10.

Only the keenest enthusiast will be able to tell you went for the V8 instead of the range-topping V10 – until it fires up.  See the Audi R8 V10 Spyder in action on video here Read about evo’s long-term Audi R8 V10 Spyder