If a brand new car doesn't flick your switch, here are three alternatives for £50k 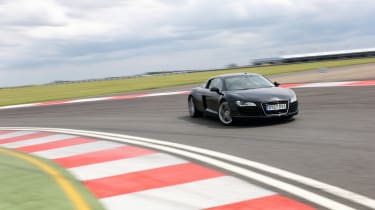 Our latest group test pits three sports cars against each other, all of them sitting around the £50,000 mark in their standard forms. The Audi TT RS, Porsche 718 Cayman and BMW M2 are all brilliant cars in their own right, and when we put them to the test it was very tricky to choose a winner.

But what does £50k get you if you're prepared to dive into the used market? Even staying with the confines of products offered by those three manufacturers, there are lots of fantastic options - we've listed our three-car selection below. Of course, stepping up a class from sports car to supercar brings with it extra expense, particularly in servicing and running costs, while lack of a factory warranty means repairs could quickly run to teeth-grindingly expensive levels. 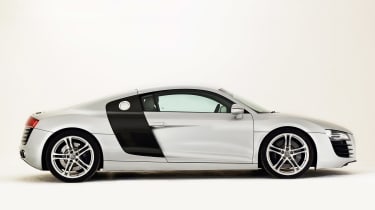 One thousand seven hundred and forty-eight pounds. That’s the difference in price between the brand new Audi TT RS and an eight-year-old Ice Silver R8 – the new car being the more expensive. It was a figure tempting enough to send the entire evo editorial team into a fit of finance calculations and ill-informed man-maths. One by one, of course, we all realised that the meagre salary of a journalist just doesn’t cut it in the mid-engined supercar world, but the point had been made. Not one of us gave a moment’s thought to TT RS repayments.

The R8 in question was an Audi Approved car with a year’s warranty. Crucially, this early V8 model had a manual ’box and just 25,000 miles behind it, meaning the only thing missing was ‘new-car smell’, but I’m told you can buy that in a bottle – £1748 would run to a lifetime’s supply.

The arrow-straight and heavily patrolled roads around Las Vegas were not the perfect setting for Richard Meaden to make his first acquaintance with Audi’s then-new baby supercar back in 2007, but they revealed enough about it for Dickie to conclude that the R8’s ‘dynamic ability and mouth-watering desirability’ would be enough to rattle Porsche. And this was the era when the 911 couldn’t lose a group test if it turned up with two leaky dampers and a missing brake caliper. 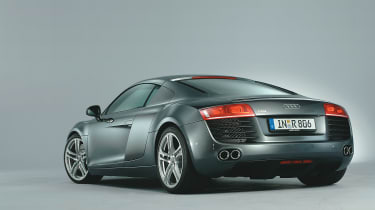 A couple of months later, now on the Côte d’Azur, the R8 saw off a perfectly fit 911 Carrera – as well as an Aston Martin V8 Vantage and a BMW M6 – in a comparison test that upended the sports coupe sector after decades of predictable (read: tedious) stability. The R8 was that good.

It still is, of course, and now £51,800 is enough to buy an exceptionally tidy and very well looked after example. You’ll slash that figure by £10,000 or more if you’re happy to buy privately and can tolerate one or two more previous keepers. What made the R8 exceptional back then and keeps it so damn tempting now is its sweet chassis balance, crisp and intuitive steering, Lotus-like fluidity over tricky road surfaces, the click-clack of the open-gated manual ’box and, not least, the stirring soundtrack and immediate response of that 4.2-litre V8.

The sports car to supercar power-output latency seems to be around ten years, because the new TT RS gets dangerously close to matching an early R8 in the horsepower stakes. With 414bhp the older car still outguns the 395bhp upstart, but the margin is pretty small and, given the TT’s swollen turbocharged torque and rapid-fire twin-clutch gearbox, the difference in straight-line performance will be minimal in the real world. In every other dynamic sense, though, the R8 is streets ahead of the TT RS, good as the new car is.

Yes, the R8’s infotainment system looks hopelessly dated compared with the TT’s sci-fi Virtual Cockpit – it was designed at a time when Trump’s presidency was nothing more than a far-fetched gag on The Simpsons – and servicing costs will be rather less palatable on the supercar, but it’s an easy one to call, isn’t it? Probably worth checking out those finance calculators one last time… 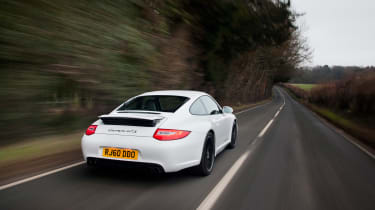 These being evo, it’s inevitable that some flavour of Porsche 911 features in a ‘used alternatives’ piece. We just can’t help ourselves, can we?

Truth be told, good used 911s are often the pin to burst many a hopeful new coupe’s bubble, for they are always perceived to be at least a league above whatever they’re compared with. Besides, Porsche’s rear-engined stalwart might be a bit of a cliché, but unless you simply can’t abide them, 911 ownership is a genuine and worthy aspiration for many.

You’d be crazy not to at least explore the notion of parking a 911 on your driveway, especially with a budget equivalent to the new TT RS or one of its rivals. So which to choose? If it were my money I’d find it very hard to resist the 997 Carrera GTS.

There was always something special about this model, right from the off. Introduced in 2010, at the end of the 997’s life cycle, it could have been just another run-out model. Yes, it was laden with options to make it seem like irresistible value, but it was also a wide-body car fitted with the special Power Kit motor (good for 408bhp, and previously a ferociously expensive option), plus centre-lock wheels and a choice of manual or PDK transmissions. Further options included sports suspension, carbon-ceramic brakes and a limited-slip differential. Find one of the handful thus equipped and you really do have something very special. 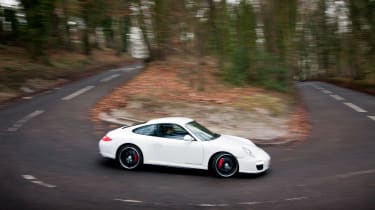 Eventually you could get a GTS in four-wheel-drive and cabriolet forms, but for me it was always the two-wheel-drive coupe that held the greatest appeal. It was – and is – a cracking machine: a model at the end of its days but also right at the top of its game. And, being a 911, it felt smaller, more characterful, more consistent and more communicative than its successor. A truth amplified by the fact early 991s were a bit below par.

The best non-GT (that’s to say non-Motorsport) 911 money could buy, the 997 GTS achieved instant cult status. A fact reflected in solid residual values, even as the 991 rendered it obsolete. Since then values have steadily strengthened. A quick scan of the online classifieds tells its own story. Sub-£60k examples are out there, but the very best can go as high as £70k – the price of a TT RS with options. That’s something of a double-edged sword, both for buyers and existing owners. Such strong prices are hard to swallow when you’re buying, but it comes with the reassurance of zero depreciation or maybe continued (modest) appreciation. The downside of chasing that particular rainbow is that it could well stop you using your car as freely as you’d otherwise like.

Given the beauty of the 997 GTS has always been its perfectly rounded abilities and irresistible usability, that would be a real shame. Few 911s before or since have been blessed with the breadth of talent to take everyday use in their stride yet offer a driving high so sweet you’re left questioning the need for anything faster or more aggressive. 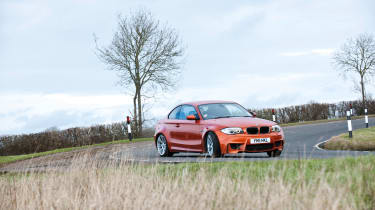 Is it any surprise that the BMW 1-series M Coupe is fast approaching modern-classic status? After all, it ticks every box. It was the first proper M-car to use turbocharging, it had a manual six-speed gearbox and looked so pumped that the World Anti-Doping Agency had serious questions to ask of BMW’s design office. It was rare too – just 450 came to the UK.

I ran a 1M on evo’s Fast Fleet and loved it. I have to say, I would prefer to own one over the current M2. In rounding off the 1M’s edges, the M2 has objectively improved but it has lost some of the purity that defined the older car’s character. I appreciate that this is a subjective point, but the 1M was singularly unapologetic. The ride was hard, the power delivery spiky at times, and the rear grip was – how can I put this? – sub-optimal in less than perfect conditions.

But I loved all this and more. I loved that it made you a better driver: perfecting heel-and-toe changes and asking you to carefully meter out the power. It is the polar opposite of so many of today’s ‘stamp and go’ performance cars. I also loved the fact that even in M Dynamic mode you could agitate the rear into oversteer, and hold it. It was doing a form of drift mode before drift modes became a thing. 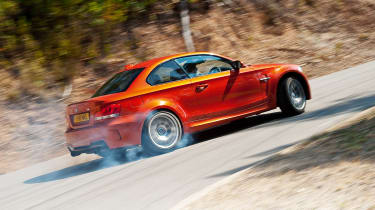 Switch everything off and it was a true challenge. The short wheelbase and aggressive M differential demanded quick reactions, but if you responded in kind, the 1M was dizzyingly entertaining, helped undoubtedly by its 50:50 weight distribution. Certainly not for the faint-hearted, but if you like your thrills accompanied by jabs of adrenalin…

Criticisms? At around 24mpg, the 53-litre fuel tank never yielded much more than 300 miles between refills, and the ride and brakes weren’t good enough. The damping always felt rather abrupt on the 1M, and we could never get in more than two laps of the Bedford Autodrome before the brakes wilted. If I owned a 1M now, I’d head to Litchfield and ask the guys to sort both issues. And while they were at it, I’d ask them to boost the power a little from the standard 335bhp. Despite the lunacy of the 1M, you always seem to want more from it.

In terms of everyday use, if you could handle the ride, it was brilliant. Compact enough to feel lithe on B-roads or in the city, and loaded with options such as Bluetooth, DAB, Harman Kardon surround-sound, satnav, voice control and heated seats. Today it feels barely older than the M2.

The 1M came third in eCoty 2011, beating the Porsche Cayman R, Lamborghini Aventador LP700-4 and Ferrari FF. Indeed, only the sublime Porsche 911 GT3 RS 4.0 and McLaren 12C finished ahead on points. That’s how good it was, and six years later still is.