With a howling 414bhp V8 that revs to 8250rpm and rear-biased quattro 4wd, the new RS4 is ready to tear chunks out of the M3 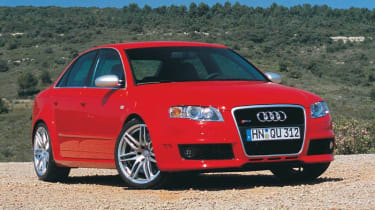 There's one of those defining moments at the launch of the new 414bhp V8-engined Audi RS4. It comes on the low-friction, wetted circuit at Goodyear's Mireval test track in the south of France. Colleagues have been circulating for a dozen or so laps, but I've been distracted by photographic duties. So when I jump into the RS4's deep bucket seat, there's only one lap of the session remaining. No time to learn the circuit, no chance to do anything other than plant the throttle and get on with it.

Despite the deliberately greasy surface and 317lb ft of torque attempting to wrench away the tyres' grip, the burly RS4 erupts from standstill with an up-tempo rumble and no discernible commotion down at ground level. With all that torque and a power output of nearly 100bhp per litre from the naturally-aspirated 4.2-litre V8 - not to mention the engine's burning desire to whack the tacho needle round to its 8250rpm limit - the rate of acceleration is startlingly aggressive.

But that's no problem, apparently. The fiery four-door seems untroubled by the first handful of corners, contemptuous of the Goodyear team's warning of how slippery this surface is. The RS4 just grips, steers, goes. Thus encouraged, the pace rises, my guard drops, then, at some considerable speed, the grip disappears. Totally. Instantly.

Stunned - yet able to begin concocting excuses as to why the Audi's big grille is soon to be choked with gravel and branches from trackside gorse bushes - I instinctively lift-off the throttle for a moment. In a BMW M3, I confidently predict that this anecdote would have ended with my immediate fears realised. However, by the time I gather my wits and re-apply the throttle, the RS4's stability control system has quelled the worst excesses of the slide in a tidy, progressive fashion, and the four-wheel drive system is gently tugging the nose back on line. Impending disaster averted.

Of course, the ability of a car to sort out grave driver error is not, on its own, reason enough to wholeheartedly recommend a new performance saloon, but in the case of the rampant RS4 it's a key differentiating factor between it and its aforementioned main rival, the M3. What you get from the RS4 is an immediate feeling of confidence to deploy to the full its dynamic forces, even when the road is unfamiliar and the weather inclement.

But then, that's hardly a revelation. Audi has been doing the quattro thing to great effect these past 25 years and the electronics that control the traction and stability systems have become ever-more sophisticated. And recent 'S' and 'RS' Audis have wowed us with stonking engines and momentous performance. Other than its V8's hunger for high revolutions, what makes the new RS4 more worthy of comparison with the M3 than its forebears?

Well, there are a couple of important factors, perhaps the most significant of which is a change to the way that the torque is shared between the front and rear wheels. Previously Audi has stuck religiously to a 50:50 split, arguing that it's best for chassis balance. For the RS4, the split becomes 40:60 front to rear, in recognition of the fact that cars with a lively rear end tend to find more favour with keen drivers.

Then there's the steering. It now has more feel, meatier weighting. Judging by the bewildered looks of Audi's engineers and the barrage of questions on the subject directed towards the British journos over dinner the previous evening, we dwellers of the sceptred isle are alone in Europe in criticising Audi's regular steering set-up with its over-light assistance and dearth of juicy feedback. We're a nuisance... so Audi has changed things to try to stop us whinging. It may not be democracy, but it works.

And does the steering work, too? And the rear-biased torque split? Yes and yes, but with caveats on both fronts, and with the added proviso that what we've learned about the car thus far has been largely on a well-surfaced, dry test track. But now you don't feel so distanced from what the front wheels are doing and you can place the RS4 instinctively as you thunder into a corner at big figure speeds. As you turn the nose in with the fat-rimmed, flat-bottomed steering wheel, there's an incisiveness that has been woefully absent in previous achtung Audis. To prove the point, Audi also let us loose with an S4, which in comparison seemed about as communicative as steering a PlayStation console. An M3 probably retains the edge for steering pleasure and effectiveness, but we'll need to wait for a back-to-back comparo on British roads to properly judge how big a gap there is between the two.

Divvying up the torque in favour of the rear doesn't turn the RS4 into a drift bitch. Chuck it over-zealously into a corner and the nose will slide first. The difference is, however, that if you're more thoughtful about your approach to a bend and feed the car through it, then the RS4 lets you adjust its attitude - up to a point, at least - with the throttle and back end. This is doubtlessly better enjoyed on the road than the track, because at Mireval you can reach the point where the chassis feels as though it's going to let that colossal V8 smoke the rear tyres, but then the Torsen centre diff detects the lack of traction and sends a bigger share of the torque to the front, pulling the car cleanly off towards the next straight. It makes for quicker lap times but leaves you gagging for a button that lets the rear have all 414bhp.

That's the trouble with racetracks, of course. For most drivers on most roads, the RS4 is likely to feel plenty lively enough, and let's not forget that in the M3 it's only the best of the best of the best drivers who completely switch out the traction and stability systems. In the RS4 a modestly talented helmsman can fully disable the electronic safety net and feel happy using everything that the engine has to deliver.

And what that engine has in store for you is a level of potency that will cause an M3 to politely stick on its left-hand indicator and move out of your way. Ironically, the man in charge of developing this eight-cylinder thunderbolt, Wolfgang Hatz, was responsible for the iconic four-pot motor from the original M3, as well as some BMW and Ferrari F1 powerplants. He also oversees what goes on in Audi's motorsport programme and keeps a watchful eye on progress at Lamborghini.

The basic guts of this engine are supplied by the usefully compact and naturally-aspirated 4.2-litre V8 from the S4. The RS4's version gets new pistons, con-rods, crankshaft, cylinder heads and a fair bit more, plus the VW Group's FSI direct-injection technology. Hatz proudly boasts that the piston speed of 25.5 metres per second is a match for an F1 engine. He's equally upbeat about the fact that the engine meets Euro 4 emissions standards, has 19,000-mile service intervals, just like any other Audi, and should, if you look after it properly, go 155,000 miles before any major maintenance is required.

Those are just the bonuses, of course. What lives in the memory is the way this V8 howitzers the RS4 down the road as you sweet-shift up through the six manual ratios. A 0-62mph time of 4.8sec begins to paint the picture, but then that's becoming a pretty ordinary figure in these power-crazed days. However, 0-124mph in 16.6sec should colourfully ram home the point that this is a wildly, heart-racingly accelerative car - the S4 seemed limp after a charge in the RS4. Even just powering out of the pits at Mireval, the RS4 whip-cracks your head backwards and forces you to adjust your internal driving programme from 'manic saloon' to 'supercar'.

You do have to learn to use all the revs, though. You get at least 90 per cent of the peak 317lb ft of torque all the way from 2250rpm to 7600rpm - passing the peak at 5500rpm - and it's easy to find yourself punching up to the next cog at 6800rpm or so, simply because in most other V8s the game is well and truly over by then. Hang on in there, though, because while the power has peaked by 7800rpm, the V8's symphonic crescendo makes it well worth wringing out the revs all the way to the 8250rpm limiter.

As for what it sounds like, think racing V8 through ear-defenders. Yes, Audi wants to kick M3 ass, but there are also the sensibilities of everyday users to consider. Which may also be why Audi has fitted an 'S' button on the left-hand steering-wheel spoke. It's one of those buttons that you could easily mistake for something to do with the cruise control or stereo, until you press it... The thigh bolsters of the already deep front sports seats increase their rake, while at the same time the throttle response turns super-aggressive. Maybe the button should have been labelled 'A' for animal; the car seems to go pretty well even before you stretch out a digit.

You could argue that Audi was just playing with the S4. Knew it was never going to be a challenge for the M3 so never really tried with it. The RS4 demonstrates a much more serious intent. It has a stupendous engine, monster, fade-free brakes, perspiration-inducing performance, broader front and rear tracks, RS6-style adjustable damping, a more playful torque split (soon to be employed on all sporty four-wheel-drive Audis), braveheart roadholding, aluminium suspension, bonnet and front wings for lightness, and steering that answers most - though not all - previous criticisms of the company's direction- finding system.

If you're a rear-drive fundamentalist then my guess is that you will still find an M3 a more challenging proposition. Yet the gap between the (admittedly £9K or so more expensive) Audi and rival BMW is the slimmest it has ever been in terms of desirability. An October shoot-out between the two on damp, mucky British B-roads should prove one of this autumn's most intriguing confrontations.