'It immediately feels agile and responsive, the meatily weighted steering clean and direct, the rear squatting and digging for grip' 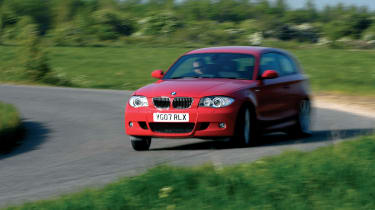 Catchpole arrives in the BMW. He gets out, casts an eye over the other contenders and then looks back at the BMW with a smile that says ‘the winner has arrived’. In three-door form the 1-series looks funkier, and although it isn’t conventionally handsome there’s something about its stance that makes it look more dynamic than the others; that something is rear-drive. The rest here have transverse engines with end-on gearboxes, which means their front wheels can’t be pushed as far forward and their weight distribution is nose-heavy.

Settle into the driver’s seat and the little BMW feels good; you’re set low in the high-waisted cabin and the seat supports you in all the right places. Ahead is a chunkily rimmed M steering wheel and there’s a matching gearknob, but overall the quality of the trim seems a notch below the Audi. It looks a bit cut-price compared with the Alfa, too, which shows it up as a cockpit derived from a much less expensive model. There’s unmistakable quality in the 130i’s drivetrain, though. At idle the 261bhp six throbs bassily, and it pulls cleanly and energetically right through to the red line. The six-speed ’box is a joy too, the short lever snicking between ratios with a beautifully weighted, tight precision. It makes the Mazda’s feel like it’s out of a hire car and even the Audi’s seems a bit dry and notchy in comparison.    Within a minute of getting into the BM, I’m chucking it into the photography corners. It immediately feels agile and responsive, the meatily weighted steering clean and direct, the rear squatting and digging for grip under the onslaught of instant grunt from the naturally aspirated 3-litre six. DSC gets disabled for the second run and despite the lack of a limited-slip diff, when the nose tucks into the corner on a trailing throttle, a stab of full throttle gets both rear tyres spinning and the tail arcing round. Keep it nailed and you can ride out the slide quite easily, though I suspect the almost brand new tyres on this car aren’t yet giving full grip.

There are a few chinks in the BMW’s armour, though. While those of us who like to tweak the tails of powerful rear-drive cars will be pleased that the M Sport obliges, there is, of course, a lot more to the driving experience. Dynamic composure starts with ride control, and the 130i is surprisingly compliant at moderate speeds. The S3 is more taut, more tightly damped and probably more stiffly sprung, because it has four-wheel drive. The 130i is relatively soft at the rear to promote good traction – no slippy diff, remember – and this elasticity seems to extend to lateral compliance, robbing the M Sport of the transient sharpness you expect. So while the steering is marvellously direct and the engine is sensitive to the lightest throttle pressure, at times the chassis can feel a bit woolly in its responses.

That said, it’s a contrast you get used to, and the suspension re-tuning does seem to have eliminated the tendency of the 130i’s back end to bounce disconcertingly on roads with a particular combination of bumps. The ride of the M Sport 1-series is still far from perfect, though, feeling unsettled and thumpy on some back-roads, but it’s hard not to be charmed by the brio and character of its oversized engine, its throttle-adjustable rear-drive balance and the tactile satisfaction of its gearshift and steering.

BMW at MillbrookThe BMW gets to carry the VBOX test gear first and sets impressive benchmarks for the rest. Despite the feeling that it’s not delivering all the traction it might, the 130i shimmies off the line with barely 2000rpm dialled in to record 0-60mph in 6.1sec and 0-100mph in 15.3sec.

Despite the traction advantage conferred by its four-wheel driveThe BMW goes next, and treading the limit requires more driver input. Understeer never really takes hold, even through the tighter turns, instead the escalating power eases the tail wide, neutralising the car’s attitude as the corner goes on, but you have to be smooth into the fast corners so as not to provoke big tailslides. Three laps in, the middle pedal feels soft, but the best lap is still to come: 1:31.7, a result that surprises us all.