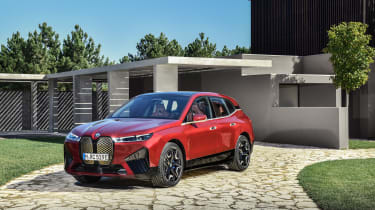 Following on from the i3 and i8, the next stage in BMW’s electric vehicle strategy has been revealed in the form of the iX SUV. This all-new battery electric SUV will be a forerunner to a wide-scale expansion of BMW’s EV range, which will play a larger role in the wider line-up than the aforementioned i3 and i8. Arriving at the end of 2021 and priced somewhere around £100,000 in the UK, the iX will sit at the top end of the EV SUV market, rivalling the incoming Mercedes EQS SUV derivitive.

In a divergence from the i3’s carbonfibre construction, the iX instead falls back on an aluminium spaceframe with BMW’s ‘carbon-core’, a strategic application of carbonfibre in key areas of the chassis to reduce weight while maintaining stiffness and, more importantly, reducing costs. The iX’s body has a similar length and width to the BMW X5, but sits lower and has a wheelbase that’s only a touch longer than an X5’s at 3000mm (+25mm). No other specific dimensions or weights have been revealed so far, but if the iX weighs less than 2000kg we’ll be surprised. 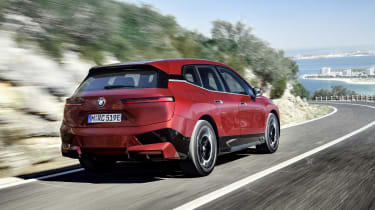 The chassis houses two electric motors – one mounted on each axle – that together produce over 500bhp, allowing the iX to reach 62mph in under 5sec. The 100kWh battery pack has an estimated range of upwards of 300 miles, with a figure of 375 miles a target BMW is aiming for ahead of the market introduction. This puts it well ahead of Audi’s e-tron and the Mercedes EQC, but with both of those cars being based on existing platforms they represent an older generation of BEV development, so it’s to be expected. The same can also said of BMW’s own iX3.

The iX will have a peak 200kW recharge capability, which will charge the batteries from zero to 80 percent in around 40 minutes. However, as it stands, charging facilities with that much power remain scarce, making it more of a future-proofing exercise. On a standard 7kW wall charger it’ll take more like 11 hours for a full-charge. 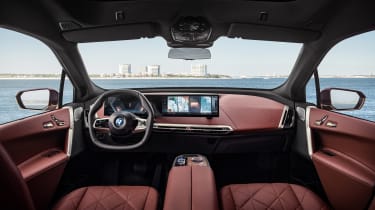 Of course, the iX is also designed to look like a future BMW, and its styling certainly diverges from that we’re currently familiar with from the marque. The body is crisp, teutonic and clean, introducing a more contemporary rendition of a design language that’s been honed for the best part of 80 years. Highlights include the wraparound tailgate, slim LED lighting and a repurposed kidney grille, which no longer provides cooling to the engine, but houses the iX’s extensive tangle of sensors and cameras that run the active safety and future self-driving hardware.

The interior reveals its own vision of tomorrow with a revolutionary aesthetic that’s minimalist by design and execution. The dash is dominated by a curved twin-screen se-up that houses a 12.3-inch driver’s and 14.9-inch central display, both running the next-generation interface that will soon spread across the range. Other elements, such as integrated touch controls in a wooden veneer, slimline air vents and reimagined transmission and driver mode selectors all signal a willingness to push the iX’s design further, just as the i3 and i8 did when they first introduced BMW’s i brand.

While the notion of an electric SUV generates little interest for those of evo’s disposition, it’s the iX’s design, technology and forward-looking fundamentals that will inform BMW’s future line-up, expanding beyond this iX into models more on our radar.