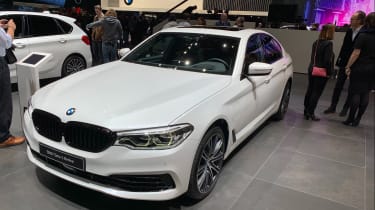 While other manufacturers were populating their stands with an endless array of purely electric concepts BMW played it safe and revealed the full extent of its PHEV armoury with several world premieres and the debut of what BMW says is its fourth generation of plug-in hybrid powertrains.

The most important model, certainly in terms of sales, is the new 330e which marries a four-cylinder 181bhp petrol engine with a 67bhp electric motor for a combined system output of 249bhp. Thanks to an ‘XtraBoost’ system there’s also an additional 40bhp that can be called upon when in Sport mode. The 0-62mph dash is dispatched in 6.0sec and it has a top speed of 143mph. Its all-electric range is quoted as being up to 37 miles.

While the 330e’s details have been out in the open for a number of months now the X3 xDrive30e is a new model that made its full debut at Geneva and it uses the same basic architecture as the 330e, although in the case of the X3 30e it drives all four wheels in both hybrid and electric modes. Its claimed electric range is 31 miles and apparently it can return up to 117mpg, although as BMW is still sticking with NEDC equivalent figures for its PHEV models in Geneva its more real world WLTP figures will be slightly less impressive. The X3 30e will start production at the end of 2019 for a 2020 debut when BMW also intends to launch a BEV version of the X3, too.

If you managed to get past the hugely dominating kidney grilles on the facelifted 7 series you’ll have discovered the new 745e PHEV models which come in standard and extended wheelbase versions and with rear- and all-wheel drive. For the 7 series BMW uses a 282bhp straight-six allied to a 111bhp electric motor for a combined maximum output of 388bhp and 443lb ft of torque.

That’s enough to push the two-tonne machine along at quite a rate of knots with 0-62mph taking between 5.1 and 5.3sec depending on how many wheels are driven and the length of the wheelbase.

The fourth PHEV on BMW’s stand to receive its public debut was the X5 xDrive45e and this uses the same drivetrain as the xDrive version of the 745e. It offers a 5.6sec 0-62mph time and BMW reckons it will have an all-electric range of up to 50 miles.

BMW also announced changes to the 530e and the 225xe PHEVs with revised lithium-ion batteries to increase their electrically powered ranges by 30 and 25 per cent respectively.