New BMW M5 impresses during this first taster, with 4WD usability but a wild side to keep M-car fans happy 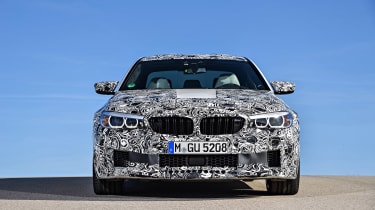 Underneath the scruffy bodywork and camo-swirls this is the new F90 BMW M5. Not a G30 M5, even though it’s based on the latest 5 Series, the G30, because these days M cars get their own unique type number. F90 it is. And there’s one key point that sets it apart from any of the previous incarnations of the original supersaloon (all five of them): it’s four-wheel drive.

BMW engineers call this car “two cars in one”. They also use the word “inevitable” - the ‘they’ being both BMW M boss Frank Van Meel and Vice President of Engineering Dirk Häcker - when discussing the fact that both axles are driven. 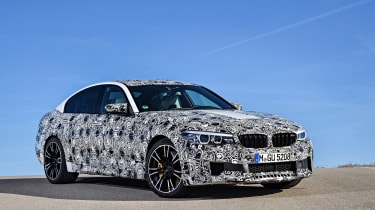 While BMW has been under pressure from certain markets to offer just such a car, the real issue has been the steadily increasing power outputs required to stay competitive in this class. After all, there is only so much torque that can realistically be deployed through the rear wheels of a big saloon. Yet BMW, much like rival Mercedes-AMG with its new E63, has not forgotten the entertainment factor. This is a car able to revert to rear-wheel drive at the touch of the iDrive screen.

“The car had to feel like a rear-wheel drive car, but with a bit more traction”, is Van Meel’s succinct summary of the project brief. To achieve that the engineers have adopted and developed existing components from the parts bin - the active M rear differential from the M3/M4 and the transfer case from the M760i - and combined them with its own software in one single integrated control module. That transfer case behind the M5’s gearbox contains an electronically controlled clutch with a propshaft running to the Active M Diff at the rear, from which new carbon fibre clutch plates can distribute torque from 0-100% left to right.

Meanwhile, another propshaft runs to one side of the car’s centerline up to the front axle, and another pair of driveshafts with an open diff. For the first time one ecu looks at every input: steering, throttle and brake from the driver, plus yaw, lateral and longitudinal data and individual wheel slip from the car. Essentially, it should know what’s going to happen before you do. 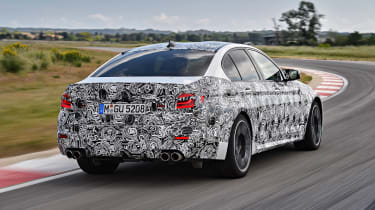 The really clever bit is the active centre differential, because that clutch can be anything from 100% locked open - making the car rear-wheel drive only - to completely closed (effectively 50:50 split). M engineers don’t like to talk torque split percentages, because the M5 apparently deals in much subtler, precise metering to individual wheels. What they claim, is that so sophisticated is the M5’s ‘brain’ that the shuffling around of torque is undetectable.

It helps that the G30 is usefully lighter than the F10. Despite somewhere around 60kg (no specifics, yet) of additional driveshafts and differentials, the new car is slightly lighter than an F10 M5. Wheels are 19” as standard, with either Continental or Yokohama rubber, or 20” as an option, shod with Michelin Super Sport 4s or a Pirelli equivalent. Brakes are steel discs as standard (blue calipers), or carbon ceramic as an option (gold). Oh, and that’s a carbon roof, too, although it’s hard to see on a disguised prototype.

To understand the new M5, you need to know how the modes work together. There are the usual Comfort, Sport and Sport Plus modes individually attributable to the steering, throttle and dampers, and the Drivelogic gearbox has three shift programs too. But it’s the DSC operation that really matters: with it fully on, the M5 is about as four-wheel drive as it gets. 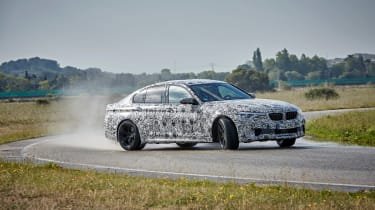 Move to M Dynamic Mode and that becomes ‘4WD Sport’, which, predictably, favours a more rear-biassed set up. Switch everything off, and you then have a choice of three modes: the aforementioned ‘4WD’ and ‘4WD Sport’, plus now also ‘2WD’. ‘2WD’ is 100% rear-wheel drive, 100% of the time, and yes, it is only available with no electronic safety net whatsoever. Your preferred setups can be saved to M1 and M2 programs, toggled by little levers behind the spokes of the steering wheel.

The F90 is powered by a ‘new generation’ of the familiar 4.4-litre twin turbo V8, now with higher injection pressure (350 bar), redesigned turbochargers and new cooling and oil supply systems. It’s connected to an eight-speed Steptronic ‘box this time, not the M-DCT twin clutch setup of the previous car.

According to Häcker the ultimate performance of the two gearboxes is virtually identical, but the traditional auto option still holds an advantage in urban driving where it’s smoother in operation. With the same ethos in mind, the rear subframe is now attached to the body with bushes, not solidly mounted. With the drastic improvement in traction off the line, the 0-60mph time is apparently 3.5-seconds or less.

We’re sampling the new M5 at BMW’s Miramas testing facility in the South of France, and once out onto the circuit the new car feels relentlessly, brutally fast. Just a squeeze of the throttle surges the car forward with ease, while summoning everything is going to be a fleeting experience on the public road. There are no official figures yet, but rumours of around 607bhp and over 516lb-ft sound about right - if almost conservative from behind the ‘wheel.

This is the first M5 to feature electric power assistance for the steering. It’s one of BMW M’s better efforts - the kind where you soon learn to trust its precision, and later when lapping the wetted ‘low grip’ circuit it’s possible to get a real sense of the grip available. 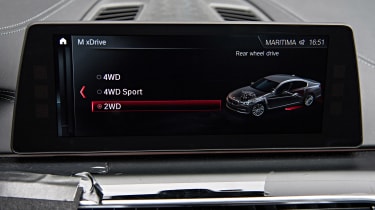 The initial signs are that the new M5 is surprisingly agile for a car of its size. Adjust the throttle in a corner and the car’s attitude subtly shifts; change direction through the fast ‘S’ curves and it repeatedly locks onto its new line with dogged enthusiasm, resisting understeer keenly.

But it’s at the exit of a corner that the new M5 is particularly interesting. Even in the standard ‘4WD’ setting it always feels rear-driven, and if you’re generous with the throttle on the corner’s exit it’ll adopt a surprisingly neutral attitude. For such a big, powerful car it’s not in the least bit intimidating - even with the DSC fully off - despite the physics at work. Select ‘4WD Sport’ and the electronics allow the tail to step out of line given similar provocation, but then pull things straight with only the slightest steering input required.

It looks more spectacular than it actually feels from inside the car. So if you really want to wrestle with 600bhp in its uncensored form, select ‘2WD’ having completely removed DSC, and the M5 is as tail happy as it’s ever been, although with a nicely progressive nature.

One more thing: there’s a new switchable sports exhaust on offer, but the V8 still won’t win any personality contests and its voice isn’t a patch on an AMG V8.

No word on pricing yet, but using the last car as a guide and rivals’ pricing this will surely be a £75,000+ car. Expect a major confrontation with the new Mercedes-AMG E63, while Audi’s RS6 is available as an Estate only.