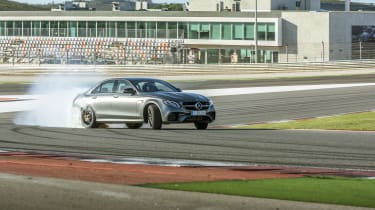 Big, powerful Mercs have been storming the Autobahn for years and years – anybody who's been overtaken at 150mph by something with an AMG badge will testify. The latest in the breed is the Mercedes-AMG E63 S – the fastest and most powerful E-class ever.

It's a monument to what defines a big AMG in the modern age – turbocharged, four-wheel drive, and class-leading interior tech, build quality and driver assistance tech. However, it also remains true to the AMG brand, keeping the excess, the power, and the theatre that made AMG the celebrated performance division it is today.

It’s fast, capable and refined, then, but it’s also capable of being just as wantonly excessive and brutally overpowered as any AMG that’s gone before it.

The 4-litre twin-turbo V8 is familiar from the AMG GT supercoupe and the smaller C63, but for the new E63 S it gets uprated internals and twin scroll turbochargers. This is the most potent version of the ‘hot-vee’ engine yet – 603bhp and 627lb ft of torque from 2500rpm.

The transmission is a newly-developed nine-speed automatic – rather than a twin-clutch – that uses a wet clutch instead of a torque converter. Power is distributed to all four wheels – there’ll be no rear-wheel drive version – with 100 per cent of torque sent to the rear axle until the computers detect any slip, at which point up to 50 per cent can be send forwards. 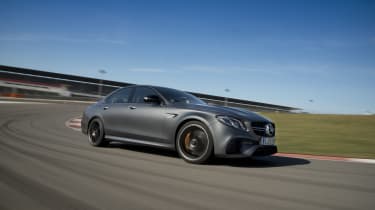 The four-wheel drive system is perhaps the most intriguing component in a fiendishly complex drivetrain. Called 4Matic+ it keeps the front wheels unburdened by the need to deliver torque to the road on the way into a corner by sending all drive to the rear axle, thereby leaving the front tyres free to deal with the lateral turning force only. That improves turn in and reduces understeer.

The centre clutch only closes to send drive forwards when the throttle is applied away from the corner and the system senses a loss of traction at the rear tyres. The E63 can therefore combine the agility of a rear-wheel drive car with the traction of a four-wheel drive car.

A more controversial feature is the drift mode, the sort of function you might expect to see on a hot hatch but hardly on an expensive supersaloon. In fact, unlike other drift modes the E63’s simply locks the centre clutch closed, effectively making it a purely rear-wheel drive car. 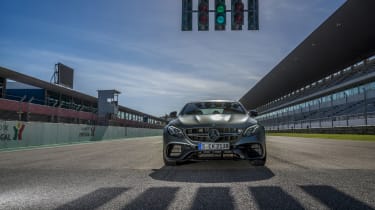 Refined and comfortable around town and civilised on the motorway. The cabin is superb, too, with a very modern design, excellent materials and a very high standard of fit and finish.

The change in character when you select the Sport or Sport Plus mode is akin to Bruce Banner’s metamorphosis. Despite the sheer mass of the car it suddenly becomes supremely agile with a very responsive front axle, huge mid-corner grip and, of course, vast traction, too. With tight-fisted body control and quite remarkable damping the E63 overcomes its weight to navigate its way down a twisting stretch of road with the manners of a much smaller, lighter sports saloon.

The four-wheel drive system allows just the faintest suggestion of oversteer, at least with the electronic stability control switched back a notch, before calling time by sending drive to the front axle. Whereas a similarly powerful rear-wheel drive car would be sat at the exit of a corner turning its tyres into smoke, the E63 gets up and goes, stretching its lead with every twist and turn.

Mercedes claims the electric steering system delivers ‘optimum steering feel’, which is a stretch, but this is certainly one of the most direct, natural and intuitive variable-ratio systems we’ve come across. It doesn’t drip with feel, but somehow it gives an unspoken sense of how much grip is in reserve across the front axle, and that’s really all you need to place the car right on the limit corner after corner. 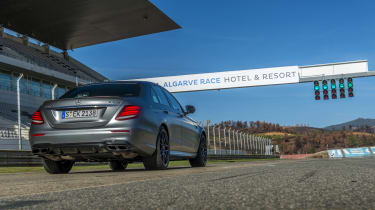 Responsive, linear in its delivery and furiously powerful the engine is a masterpiece. It endows the AMG with prodigious straight-line performance –perhaps more than any other supersaloon – and despite its use of a pair of turbochargers the soundtrack is very evocative, too. The gearbox, meanwhile, is every bit as quick and responsive as you could need in a car of this type, only giving up anything to a twin-clutch unit in upshifts called right at the limiter.

Inevitably the E63 feels less at home on circuit, but if you’re patient enough with the front end on the way into corners there is enough control, precision and agility – not to mention power – to have some fun. The drift mode, too, is hugely entertaining, giving the car all of the over-powered, oversteer-in-any-gear character of any AMG you care to mention.

That’s the new E63 S’s greatest trick – combining ultra-modern dynamics and performance with the sense of mischief that we’ve come to love AMG for.

Mercedes-AMG E 63 prices start a whisker under £80k for the standard model, with the ‘S’ variant carrying a near-£10k premium. The extra practicality of the estate comes at a price, adding about £1000 to the final price of both versions.

The Mercedes-AMG supersaloon isn’t short on rivals with other German marques offering some serious competition. The BMW M5 introduced the world to this performance segment, and our pre-production drive of the upcoming F90 generation hints that the E63 could be deposed from the supersaloon throne. Audi’s successor to the current RS7 will also have plenty of firepower when it arrives late next year.

Another VW Group product, the new Porsche Panamera Turbo, is certainly no slouch either. Outside the German supersaloon stable is Tesla’s Model S P100D providing superlative performance in an altogether different way. 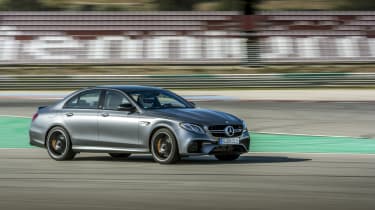 The new BMW M5’s switch to four driven wheels follows the E63, crucially it hasn’t dulled the driving experience. In the power tables it falls shy of the Mercedes (in S guise) producing 592bhp and 553lb ft of torque. The lesser power also translates to a lesser voice that can’t match the E63’s rapturous soundtrack. The first UK deliveries will take place in February next year with a base price of £90k.

The Porsche Panamera Turbo is priced someway above the Mercedes-AMG E63 at £115k. It covers ground at a speed that belies both its size and weight, offering a satisfying level of engagement. Like the Mercedes, a more spacious option lies in the ranks with the shooting-brake Sport Turismo, too.

While we wait for the RS7, the RS6 Avant offers a quality combination of speed, luxury and practicality. It’s only available in estate guise, with prices starting from a tad over £80k. Budget another £7k for the Performance-spec model and Audi will remove the top speed limiter and coax an extra 45bhp from the 4-litre V8. 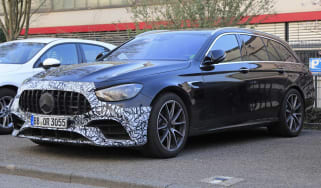