The new M5 is immensely capable but it may not have enough character to topple its arch-rival, the Mercedes-AMG E63 S. 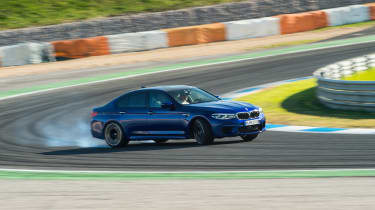 At a glance, the new M5 (codename F90) might look a lot like the previous generation model (F10) but there are lots of small and medium changes and one major difference - the new car is four-wheel drive. But not permanent four-wheel drive; if you wish, you can make it just rear-drive, and then it becomes a very good drift car. In this sense, BMW is playing catch-up because the 603bhp Mercedes-AMG E63 S has already brought this novelty to market, to acclaim from oversteer fans (most motoring journalists) and tyre manufacturers (probably). 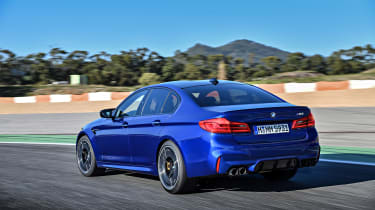 The output of the 4.4-litre, twin-turbo V8 has risen to 592bhp (600ps), an uplift of 40bhp, while torque has risen even more, from 501 to 553lb ft, presumably because all-wheel drive means the car can handle more. Zero to 62mph is in a claimed 3.4sec – which is a whole second quicker than the previous, rear-drive model, even though the gearbox is now an eight-speed automatic rather than the previous model’s seven-speed dual-clutch transmission (DCT).

The twin-turbo V8 has been reworked with higher fuel injection pressure (350bar v 200) which has given more control over the combustion process, enabling the power uplift, and also helps the 4.4-litre V8 meet emission requirements more easily. The latter is also helped by the adoption of an eight-speed Steptronic auto, which gives a greater span of gearing than the DCT. Shift times are claimed to be similar to the DCT.

The all-wheel drive takeoff is from a clutch pack in a transfer case at the back of the gearbox and although the car is rear-drive in most circumstances, in default all-wheel drive mode, torque can be sent to the front pre-emptively when the car thinks the extra traction will help, or in response to rear slip. Or not at all, when rear-drive only mode is selected. 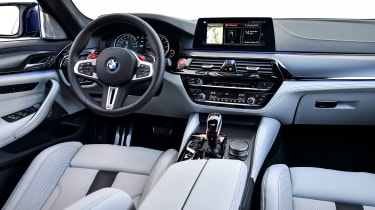 The test car was fitted with the optional M Sport exhaust system, which is claimed to add bass tones. Aurally, the more potent V8 has more about it than it did in the previous generation M5, but it doesn't have the woofle and bassy bellow of a conventional V8, even with extra, synthetic noise piped in through the stereo. There’s no doubt that the V8 delivers the goods, though, with stunning standing-start take-off and relentless acceleration thereafter.

The ride is good and there’s a welcome, natural agility to the handling; the car wants to turn. However, there’s not a lot of feedback through the steering wheel so you don’t have that connection with the car that lets you feel what it’s doing. As a result, the car feels big and heavy on narrow roads where you want to place it accurately.

> For an in-depth review of the BMW 5 Series, check out our sister site Carbuyer 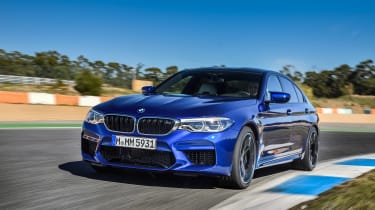 The usual tuning opportunities are there for steering weight, ride control and engine and gearbox response but now you can switch from all-wheel drive to rear-drive only. We tried the car on warm, dry asphalt, and in key-on, all-wheel drive trim, the car was grippy and secure. In rear-drive, traction control off, it could be coaxed into oversteer readily but controllably, though there was a bit of squirm at higher speeds as the diff tried to find grip. In all-wheel drive, traction off, it would kick the tail out as readily as in rear-drive at the corner exit but in other scenarios there was drive to the front and thus more stability.

So if you like a bit of power-on tail movement on the road, turn off traction but stick with AWD. And if you want to drift on a track, go rear-drive and you’ll find there are few big saloons more capable, predictable or entertaining as they shred a pair of rears.

At a few hundred quid shy of £90k, the M5 aligns almost exactly with the AMG E63 S. It’s clearly the car that BMW set out to beat, and they haven’t quite managed it. It doesn’t have the engine character and better steering feel would improve the car in all scenarios. It’s an step on in many ways from the previous model, and a very good M5, but the Mercedes is more appealing.