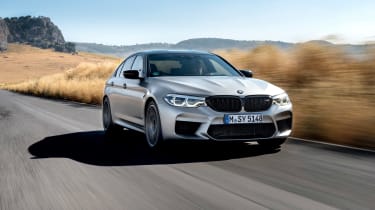 The BMW Competition recipe is now fairly well refined. Simply take an existing M-car, add a touch more power and treat the suspension to a few well-chosen tweaks aimed at sharpening the driving experience. It’s an approach that has been followed to the letter (and number) with the latest M5 Competition. Launched surprisingly soon into the current M5’s model cycle (the current car is barely a year old), the newcomer is a rival for other enhanced supersaloons such as the Mercedes-AMG E63 S.

For the Competition BMW has breathed on the twin-turbocharged 4.4-litre V8, raising power to 616bhp – although torque remains unchanged at 553lb ft. Performance gains are minimal, but the optional M Driver’s pack does raise the top speed from a limited 155mph to 190mph. Of more interest are the changes aimed at sharpening the handling, with a lower ride height, stiffer springs, recalibrated dampers and altered geometry. It all adds up to make a car that’s more involving and agile than before, yet with barely any reduction in comfort. What the updates can’t do, however, is shrink the size of the BMW, so it still feels vast.

External changes are small but worthwhile, particularly the 7mm drop in ride height, which gives the car more of a hunkered and aggressive stance. There are also new 20-inch forged alloy wheels and a subtle gloss black finish for the trim finish and the badges. Inside it’s business (class) as usual, with only the red-finish starter button giving the game away that this is the Competition model.

While the straightline performance gains are negligible, the chassis mods are very welcome, adding an extra edge to the driving experience. At £6500 the Competition upgrade looks pricey in isolation, but it’s a drop in the ocean against the car’s hefty £96,205 price tag. 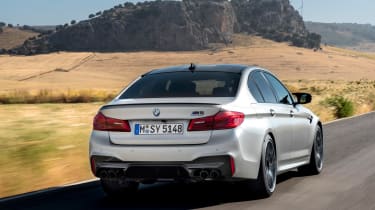 Much of the engineers’ work has been concentrated on the chassis, with the M5 now sitting 7mm lower than before, which in combination with the new 20-inch forged allows gives the Competition a much more purposeful stance. Other suspension changes include the addition of 10 per cent stiffer springs complete with recalibrated adaptive dampers, firmer anti-roll bar mounts front and rear, ball-joints for the rear toe links and more negative camber for the front wheels. Finally, the engine mounts have been changed for items that are 50 per cent stiffer.

Elsewhere the Competition is the same as the standard M5, which means you get the same M xDrive four-wheel-drive system. This allows you to run with all four wheels driven, or to disengage the front axle for some good old fashioned M-car rear-driven fun – although you need to disengage the stability control to engage this function, so you’ll need to be on high alert behind the wheel. Happily, the transmission has rear-biased feel even in its standard mode, so you can have fun without fear of taking up the whole width of the road on the exit of a corner. 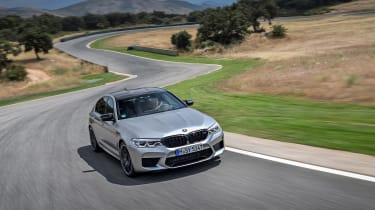 The familiar twin-turbocharged V8 now pumps out 616bhp, which is an increase of 24bhp – torque remains unchanged at a rippling 553lb ft. This drives through the same eight-speed auto as before, which is connected to BMW’s trick M xDrive four-wheel-drive transmission.

The standard M5 wasn’t exactly a sluggard, evidenced by the fact the Competition knocks just a tenth off the 0-62mph time, clocking the benchmark in 3.3sec. However, by the time the Comp hits 124mph it’s three-tenths ahead of its less powerful sibling, which is useful to know.

In all honesty, any performance gains are hard to detect, the Competition accelerating with the same deranged intensity that puts it toe-to-toe with some seriously exotic sports cars. What the Comp does add is a little extra spice in the form of a new Sports exhaust. This set-up allows the V8 to find the full baritone bark of its voice, and while it’s not as bombastically loud as the Mercedes-AMG E63 S, the M5’s more restrained soundtrack is more in keeping with the Q-car character of a true supersaloon. 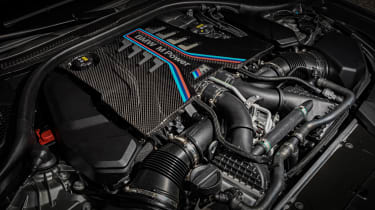 You feel the changes to the chassis the moment you move away, the M5 riding with a little more stiffness than before, even in its Comfort mode. Yet it’s still fairly supple and once you’ve upped the pace any small loss in compliance is easily offset by even tighter control.

Seek out some corners and you’ll quickly find the M5 now responds with greater alacrity to the (still too mute) steering, the front tyres biting harder on turn-in. It helps give the Comp a remarkable sense of agility for such a big machine, a sensation that’s enhanced by re-mapped dampers (Sport is best for hard road driving – Sport Plus best reserved for the track, where the Competition performs rather better than you’d expect for a 1865kg saloon) and tougher springs, which keep the BMW more planted and poised over the twisted and torn stretches of tarmac of our Spanish test route. It would be stretching the truth to say the Competition ‘shrinks around you’ – on some of the tighter sections of road the M5’s girth causes a sharp intake of breath as you squeeze past oncoming traffic – but it feels more nimble than before and far lighter on its feet than both a standard M5 and an E63.

> Click here for our review of the Porsche Panamera Turbo

As before, the trick M xDrive transmission plays its part, delivering both rear-drive adjustability to keep things entertaining and assured traction when it gets slippery. Like the standard M5 you can also shortcut your favourite driver settings using the M1 and M2 buttons on the dash, including the hooligan 2WD mode, which delivers the sort of lazy drifts you’d expect from such a long and stable machine. 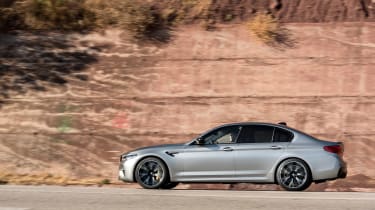 The BMW M5 Competition weighs in at a not inconsiderable £96,205, which is £6500 more than the standard car. That said, if you’re committed to spending the thick end of £90,000 to £100,000 on a car, then the extra outlay is hardly likely to sway your decision. More importantly, the improvements to the chassis are so tangible and welcome, delivering a level of poise and engagement we expect from M-cars, that you don’t begrudge the extra outlay.

The £94,275 Mercedes undercuts the M5 Competition, although not by much, and on the surface appears to offer more bang for your buck. Its 612bhp twin-turbo 4-litre V8 is fractionally down on power, but its bellowing V8 soundtrack means it lacks nothing in drama. And while it lacks the ultimate precision and poise of the M5, it can still be hustled at alarming speeds, while the ability to switch from four to two-wheel drive will make you very popular with your local tyre fitters.

Close on power and arguably even more engaging to drive, the 550bhp Porsche Panamera Turbo is even more expensive at £116,395. Like its rivals here it’s four-wheel drive, but while it can’t be switched into two-wheel-drive mode the Porsche’s clever set-up allows you to have plenty of rear-drive hilarity if the mood takes. It’s not quite as spacious as the BMW and Merc, but the hatchback Panamera isn’t short of practicality, plus its just as refined and even more beautifully finished.4.5