With the BMW M3's twin clutch drivetrain, Wiesmann's lightweight roadster is an impressive bit of kit. 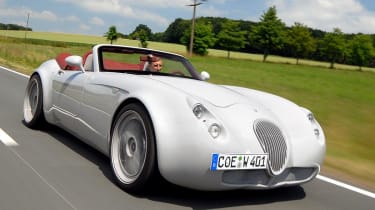 Wiesmann’s new Roadster MF4-S adds to  the firm’s impressive line-up of classic English design wrapped around bahnstorming BMW mechanicals. You have to love the approach. We’ve previously driven the MF4 with a ZF auto box, but the step up to BMW’s DCT twin clutch gives an added dimension that means the Wiesmann lives up to its eye watering £114,000 price tag.

Without doubt it’s the gearbox. Purists will argue that a car that looks like this should come with the six-speed manual, and they could have a point. But then the DCT seven-speed is just about good enough to convert anyone, blipping the downchanges when you’re charging hard and equipped with a creamy auto mode.

Simply brilliant. Better even than the range-topping MF5 in the real world. That car comes with the SMG sequential manual, which is hateful in everything other than hard, manual mode, while this one has real flexibility and does everything well.

The V8’s 414bhp is more than enough on the open road in a 1395kg package, while Wiesmann’s claimed 4.3sec 0-60mph figure smacks of a refusal to upstage BMW’s own figures. It handles like an M3 that weighs a third less, too. It can be thrown into bends, and where a '60s sports car would simply hit a tree and catch fire, the Wiesmann uses an Elise-style bonded monocoque chassis to skate elegantly through to the other side.

With less weight over the front end than the range-topping V10 MF5 it feels sharper, crisper at the nose and better balanced in the bend. The steering is a touch light for flat out track driving and a brief run at the Nurburgring revealed the wheels and arches to be a little too closely related.

It’s too soft for hardcore track work, then. But that’s not really the point; on the road the set-up rides the line between comfort and sporting intent almost perfectly.

At £114,000 including taxes the MF4-S is staring down both barrels of the Porsche 911 Turbo Cabriolet and Audi R8 Spyder. Both are faster, more competent, but lacking charm in comparison. It’s closer in spirit to the cheaper Aston Martin V8 Vantage Roadster – that particular battle could come down to the toss of a coin.

Buying a Wiesmann gets you more than a car, it’s a virtual social club with drives through the Alps, trackdays at Spa and the Nurburgring and more laid on throughout the year. Which is nice, in an old-fashioned kind of way. They also have one of the largest merchandise ranges this side of Ferrari.