An American car based on a Smart? Seems like a long shot, but it was close to happening in 2004 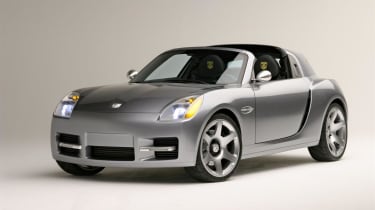 Few cars seem less appropriate for a US audience than the Smart Fortwo. It’s small, frugal, unthreatening – all characteristics far removed from the country’s best-seller, the Ford F-150.

Yet Daimler continues to sell the tiny city cars in North America, and they do find favour with a small, dedicated audience who appreciate the cars’ unique styling and compact proportions.

We can’t help feeling the old Smart Roadster would have been a better prospect for success in the USA though – the popularity of cars like Mazda’s MX-5 suggest a ready market for fun, affordable sports cars.

Surprisingly, the Smart Roadster did get close to hitting the US market, though perhaps not in the form you’d expect.

Back in 2004, when Daimler and Chrysler still coexisted peacefully, subsidiary Dodge unveiled a sports car called the Sling Shot. Compact but chunky and filled with pleasing details, the concept almost looks like some kind of scaled-down Porsche to 2016 eyes, but under the skin was a different sports car: the Smart Roadster.

The clues could be found throughout: Dodge’s press release talked of a rear-mounted, 3-cylinder gasoline engine, characteristics that match the Roadster precisely.

In profile, the Sling Shot had more than a hint of the Roadster Coupe’s fastback rear hatch too, and in the cabin there was a familiarity to the general control layout, and especially the seats. 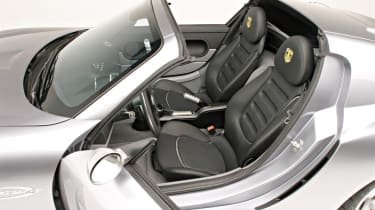 But there were differences too. The Sling Shot got its own five-speed gearbox. Not a manual, sadly, though the automated unit was different from the six-speed automated-manual of the production Smart.

The Sling Shot’s engine was also naturally-aspirated and developed 100bhp, good for a 0-60mph time of around ten seconds – a little quicker than the official 10.6 seconds of a standard Roadster. And where all Roadsters used rear brake drums, the Dodge had discs all round.

45mpg was claimed. Given that figure is quoted in smaller US gallons, the UK equivalent would be a healthy 54mpg – certainly something that would stand scrutiny in the modern market.

So why did the Sling Shot never see the light of day? No official reasoning was ever given, but there are several plausible causes. Smarts may be small but they’re also relatively complex machines, which pushes pricing up – and the US market is very price-sensitive. A car with limited power against rivals may fall flat, however fun it is to drive.

Then there’s the sad fate of the Smart Roadster itself, canned due to lower-than-expected sales. With Daimler holding the chequebook, it might have decided early on that the extra investment in a Dodge version wouldn’t be worth a modest sales increase.

Today of course, such a car would look a lot more plausible, with Mazda’s MX-5 doing well, the Fiat 124 also making an impact and the possibility of a small sports car from Toyota. How special it would be to have an American automaker joining in on the fun.