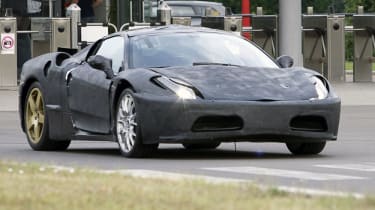 This is the all-new Ferrari F450. It replaces the fantastic F430 supercar next year, and clearly has quite a hard act to follow.

Ferrari rarely puts a foot wrong, though, and evidence suggests its new mid-engined eight-cylinder car will be another leap forward for the Prancing Horse. It gets more power and a larger engine, for starters. The clue’s in the name – displacement is up from 4.3 to 4.5 litres, with the new V8’s power expected to be north of 500bhp.

That’s not to say the Italian brand is chasing high power outputs, though. The F450 is set to be a bit of a tech fest, with a lightweight aluminium structure on the cards as well as some complex aerodynamics to cut drag and maintain downforce. There could even be a hybrid version, in concept form at least, as Ferrari chases technology to ensure its supercars have a future.

The F450 will acquire a slightly tweaked version of the California’s rather brilliant seven-speed double-clutch transmission, too, and there’s the possibility of a roadgoing version of KERS (Kinetic Energy Recovery System) to give a welcome boost to the car’s efficiency and emissions.

The new Ferrari F450 is expected to make its first public appearance at the Frankfurt motor show this September, with sales beginning next year. The Spider version is a bit of a way off though – expect that around 18 months after the coupe, in order to give the freshly launched California a bit of breathing space in the Ferrari open-top range.

To read more about the future of the supercar, pick up Issue 134 of evo – on sale Weds July 22.