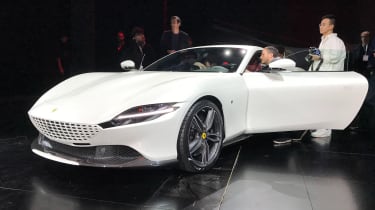 Ferrari has revealed a new V8 coupe called the Roma at a client event in Rome. The new coupe sits above the Portofino, below the mid-engined F8 and V12 812 Superfast in Ferrari’s line-up and joins the GTC4 Lusso models in the company’s GT range. Prices start from around £190,000, and first cars will hit the road in summer 2020.

A new front-engined, rear-drive, 2+2 coupe with a 611bhp twin-turbo V8. A cynic might say it’s just a Portofino coupe but that cynic would also have to concede that it’s a handsome thing, particularly from the rear three-quarters, and beneath its smooth skin is much more than a Portofino floorpan.

The Roma is one of the five new models Ferrari promised to launch in 2019 and which it teased as a GT that would hark back to the simple and stylish Ferrari coupes of the ’50s and ’60s. Inspired by models like the 250 GT Lusso but not a retro-looking car, which Ferrari said it would never do.

Refreshingly, the Roma does look like it was lovingly shaped in a styling studio rather than the formed in a wind tunnel and is the work of Ferrari’s own, Flavio Manzoni. There are no vents breaking up its smooth flanks or vast bonnet, the door handles are flush and it looks particularly clean without Ferrari wing shields. Lots of the aero work is done by the underfloor but there is a deep front splitter and an active rear spoiler at the foot of the rear screen that has three positions and raises automatically or dependent on which drive mode is selected. There’s also a new key in the shape of the square Ferrari badge.

The wheelbase and front track widths are as Portofino but the rear track is 40mm wider. The floorpan has been thrifted for weight, the rear overhang is much shorter and the declared kerb weight is 1570kg (1472 dry). It should be a much more dynamic car than the Portofino, being stiffer, lighter and with a lower centre of gravity.

The Roma’s manettino offers five modes compared to three on the Portofino, pointing to a greater dynamic bandwidth, from comfortable cruising to track work. It also features the latest Ferrari electronics, including sixth generation side-slip control and FDE – Ferrari Dynamic Enhancer - which helps make car control smoother and calmer over the limit. 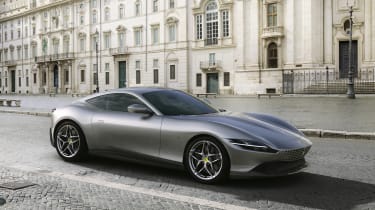 To get the modest power uplift over the Portofino Ferrari had to coax around 35bhp more from the V8 because the Roma is fitted with power-sapping Gas Particulate Filters. To achieve this there are less exhaust silencers to reduce back pressure (and improve the exhaust note) and, as on the F8 Tributo, individual turbocharger speeds are now measured, allowing their performance to be maximised. The 3.9-litre V8 is hooked up to a rear transaxle housing the SF90’s new eight-speed dual-clutch gearbox rather than the Portofino’s heavier seven-speeder. Claimed performance is 0-100kph (62mph) in 3.4sec with a top speed of over 320-kph (199mph).

The stylish and attractive 2+2 cockpit features a rising centre console that splits cabin in two, with a tablet-style touch screen in the middle and instruments available for the passenger too. The driver’s side utilises the SF90’s black-til-lit instrument pack - a wrap-around 16in screen that can show traditional dials with a large central tachometer or, for instance, just the navigation. Almost all switchgear is touch sensitive. There are neat but very rear seats for small children or their backrests can be folded to create a luggage shelf to supplement the medium-sized boot space. 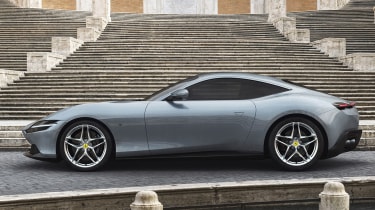 The Roma will cost a fraction more than the Portofino, so around £170k in the UK, with deliveries starting next summer. That makes it a chunk more expensive than the car it looks most like, the two-seat Aston Martin Vantage (from £120k) and less expensive that the most costliest Mercedes AMG GT R Pro (585ps, £189k).