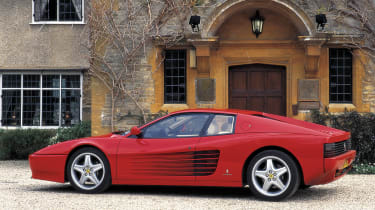 Successor to the Berlinetta Boxer and destined to be locked in a desperate psychological arm-wrestle with Lamborghini’s Countach, the Testarossa offered a crucial contrast in style and impact. Whereas the Lambo used its sharp angles and aggressive appendages for visual drama, the Ferrari relied more on its considerable width (it had 8cm on the Countach, itself hardly snake-hipped) and accentuated this advantage with flared slats and a shallow rear aspect. The overall effect was more conventional but combined a degree of subtlety with sledgehammer presence.

The Testarossa’s 390bhp 4.9-litre flat-12 – toting just as many camshafts and valves as the Countach QV’s V12 – was pretty much smashed to the table in the arm wrestle but was smooth, flexible and almost symphonically tuneful, sounding a bit like two Porsche 911s yoked together but with a very strong sense of ‘stereo’. In truth, the Testarossa was a more softly focused machine than the Lambo – a superfast, two-seater GT rather than a raw, red-blooded racer.

But if the Countach was comfortably more accelerative, it was a closer run thing on top speed and the Ferrari had superior cruising refinement. For pure driving excitement, it had to be the Lambo, but the Testarossa was easier  on the nerves and its flat-12 a great engine to live with.

It would undergo two major repackaging exercises – first in 1992 when it reappeared as the 512TR with a 428bhp version of the flat-12 and improved dynamics, and finally in 1994 as the F512 M, the M standing for the Italian modificato. The 440bhp 196mph F512 M was to be the last of the flat-12-engined Ferraris, truly the end of an era. The marque’s next ‘mainstream’ supercar with a 12-cylinder engine would be the front-engined 550 Maranello.