Rarely does a concept car reach production with so few changes as did the Lexus LC. The dramatic two-plus-two coupe looks different to everything else on the road, acting as a halo model for the premium Japanese brand, not to mention its parent company Toyota. The last time Lexus did this, the magnificent all-carbonfibre LFA was the result, and now, at a significantly more attainable price tag, it’s done it again.

It’s this halo status that is important here, because the LC Coupe is a vanity project at its core, meaning that it was formed with a different set of rules to higher-production models. The front suspension design, for example, was designed specifically for the LC in order to reduce the bonnet height over the front wheels as much as possible – an expensive exercise for the sake of detail proportions.

Exotic materials like carbonfibre and aluminium make up the LC’s structure, the interior is finished to an impossibly high degree, and the engines are at two ends of very different spectrums, but appeal to two very different buyers. The LC range will soon expand too, with rumours of a hot LC-F swirling alongside spied prototypes, while a thinly veiled convertible concept version will also reach production in time.

The LC is not perfect, but the car industry is a better place for it. If you’ve not already guessed, we rather like the Lexus LC, and although there are one or two caveats, this is a truly spectacular road car. 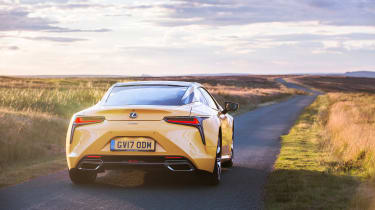 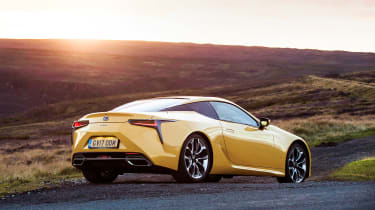 The LC 500 Coupe starts at £76,595, which you might agree is a relatively small amount of money for a car as striking as this. Both the V8 and V6 hybrid cost identical money, are available in a choice of three trim levels and do without the myriad of individual options usually seen in premium rivals.

All models are well equipped, with the entry car coming with standard 20-inch alloy wheels, a leather interior, adaptive dampers, a 10.1-inch infotainment display, a glass roof and an LFA-inspired digital dial set. Move up to the Sport Pack model (£81,270) and you’ll also pick up heated and ventilated seats, forged 21-inch alloy wheels, a carbonfibre roof and a split leather and Alcantara interior trim.

> Click here for our review of the Lexus LFA

It’s the Sport+ Pack model that is our pick though, adding rear-wheel steering and a limited-slip differential to the package. At £86,270 it’s a generous £10k jump over the standard model, but its ability to better exploit the LC’s inherently playful chassis makes it a worthwhile choice. Options are limited to an upgraded Mark Levinson stereo and head-up display. 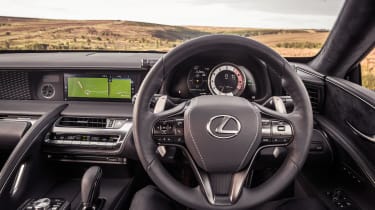 Lexus also likes to introduce special colour and trim packages at the top of the range, the latest being a Naples Yellow package, matching the yellow exterior colour to a multi-tone interior with yellow Alcantara accents. It’s a bold look, but definitely in keeping with the LC’s avant-garde design.

At this price, the LC intercepts a variety of GT rivals, such as the new Porsche 911, right through to something much more opulent in the Mercedes S-class Coupe. The BMW 8-series Coupe is probably its most direct rival right now, with a pocket-friendly 840d model matching the LC hybrid’s more laid-back approach. At £76,270 for the 840d M Sport, it’s priced within a few hundred pounds of the Lexus, too.