As there are numerous permutations across the F-type we’ll be fairly broad with our assertions. Fundamentally we would go with the two-wheel drive options rather than the all-wheel drive variants. With only the rear wheels receiving power the cars all feel much lighter and more nimble. They can be extremely oversteery too, the V6 encouraging fast entry speeds and taking attitude almost from the moment you turn in if you’re brave enough. The mechanical limited-slip diff of the S makes the oversteer nicely controllable under power too.

Meanwhile the supercharged V8 has such a surfeit of power that it will happily overwhelm the rear tyres at the driver’s slightest bidding on the exit of a corner. It feels slightly heavier on the way into corners with the extra weight in the nose, so a slow in, fast out approach will yield the most satisfying results. The electronically controlled limited-slip diff in the rear axle can be slightly hard to read at times and can feel a little reluctant to remain locked when you want it to, but generally a heavy-footed approach will solve most of this problem.

The AWD cars are much more secure in feel – surprisingly so given how lively the RWD cars feel. That’s not to say they won’t let go at the rear on very slippery surfaces, but the AWD system will ‘learn’ the grip levels and adapt accordingly. Even the AWD SVR, with its huge reserves of torque and power, feels secure in faster corner thanks to being all-wheel drive. Slides can still be easily be teased from the rear on corner exit, but it’ll only adopt a meaningful angle in very tight bends. 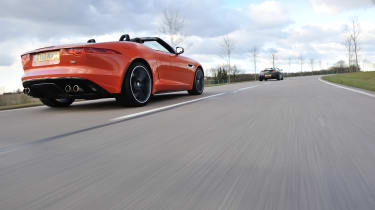 The four-wheel drive system leads to the cars that are just a little less fun, but that may appeal to drivers that find the RWD cars a touch on the lively side.

From the behind the wheel the F-type has always left the driver with the feeling that you are sitting on rather than in the chassis. The suspension can feel quite short on travel too, but the advantage of this is that the F-type (particularly the V6 variants) responds quickly to inputs and changes direction with real composure and good body control. The steering is lighter in the RWD cars (as you would expect) but the rack is quick and alert whichever variety you go for. Although there isn’t quite as much feel as we would like, the electric assistance is pretty impressive and the reactions of the front end are sharp and accurate enough to avoid real criticism, and recent tweaks to the entire model range make the F-type feel less nervous than it used to, improving driver confidence and enjoyment.

The many changes that make up the SVR do make it the most impressive F-type. The spring rates are unchanged but thanks to different damper settings the ride is slightly better, while also having very taught body control. The SVR is a very accomplished grand tourer and is huge fun on a twisting road.

Thanks to a relatively small weight deficit, only 20kg, the Convertible F-type feels much the same as the Coupé in terms of performance. The F-type’s structural rigidity isn’t too badly effected once the roof has been removed either; the extra movement in the steering wheel is only noticeable across particularly rough and demanding roads.