You’ll have to bear with us here, as the number of permutations of F-type means that there are a lot of acceleration figures. Common sense dictates we start at the bottom and work up - but as far as acceleration is concerned, several models share the bottom of the range. That 0-62mph figure, 5.7 seconds, is identical whether you opt for the new four-cylinder F-type in coupe, automatic form, or the same car as a convertible, or indeed the 335bhp V6 models with the manual gearbox, again as either coupe or convertible.

The V6s do reach a higher top speed, at 162mph to the four-cylinder cars' 155mph, but it takes the automatic-equipped V6 to go quicker on acceleration, covering 0-62mph in 5.3 seconds, four tenths ahead of the others. The way the cars deliver their performance is a little different though, the V6 being notably more sonorous but strangely not noticeably smoother at full throttle. There's definitely a bit more of a kick to the way the V6 delivers its performance though, and while neither will rev all the way to the red line with great enthusiasm, the four-cylinder really is all done once you've explored the mid-range.

Step up to the V6 S and you will reach 62mph in 5.5 seconds and 4.9 seconds for the manual and automatic variants respectively. The V6 S AWD models (only available with the automatic gearbox) reaches 62mph a two tenths slower in 5.1 seconds, which might be surprising, but the added weight is more of a hindrance than the traction is an advantage (the traction of the rear-wheel drive version is actually very good). Top speed for the S is 171mph. 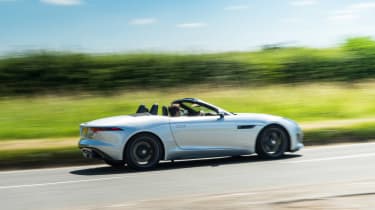 Despite a touch more power, there's no quoted performance benefit to the 400 Sport models, but they still feel the most enthusiastic of all the V6-engined models and maintain the familiar V6 yowl of the other cars.

With the V8 under the bonnet the extra grip of the all-wheel drive system does improve the 0-62mph time over rear-wheel drive alone. The difference isn’t a yawning one however, with the rear-wheel drive car hitting 62mph in 4.2 seconds dead and the AWD car shaving a tenth off at 4.1 seconds. The top speed is 186mph, which looks slightly less arbitrary when you convert it into a metric figure of 300km/h.

The ultimate F-type, the SVR, actually reaches a top speed of 200mph for the Coupé but only 195mph for the Convertible. Both reach 62mph in 3.7 seconds.