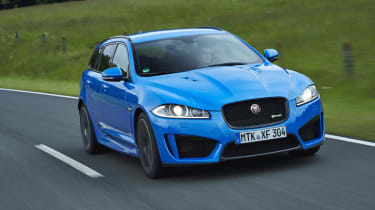 The Jaguar XFR-S Sportbrake. It’s the British firm’s first entry into the superestate market, the car a natural progression from the excellent XFR and XFR-S performance saloons. It costs £82,495, which makes it £2500 costlier than its bewinged four-door equivalent while weighing in a smidge cheaper than an AMG-spec Mercedes CLS Shooting Brake, perhaps its most beguiling rival.

Like the Jaguar XFR-S saloon, the Sportbrake is powered by Jaguar’s top-spec 5-litre supercharged V8 and produces 542bhp at 6500rpm and 502lb ft from 2500 to 5500rpm. All that torque gets to the rear axle via the superb ZF eight-speed automatic gearbox (complete with manual paddleshift override) and an electronically controlled limited-slip differential. It’s perhaps not the most subtle getaway car but should you need an emergency start it possesses a 0-60 time of 4.6sec (0.2sec slower than the saloon) and its top speed is limited to 186mph.

The regular load-lugging Sportbrake has been comprehensively revised in its transformation to XFR-S and, on paper at least, it should be up to the job. Front and rear spring rates are up 30 per cent, the dampers – which adjust 100 times per second – are retuned and there’s been a whole host of hardware changes on both axles, too. At the rear there’s a new anti-roll bar, stiffer bushes and revised geometry, and the axle itself has been strengthened to help contribute to a 30 per cent increase in lateral stiffness, which should create a much more accurate experience. At the front there are new suspension knuckles to improve camber and castor stiffness, new wheel bearings, and the steering has been re-valved, all said to increase agility and control.

Of course, we’ve got hot hatches these days that dip below 5sec to 60. However, when you feel the engine’s grip on this huge car at speeds between, say, 80 and 160mph, you know it’s a real big-hitter. The torque is monumental.  We can say this because the Sportbrake launch is in Germany and the route takes in some quiet stretches of derestricted Autobahn…

Sadly, we never trouble the limiter but there’s no question that the Sportbrake is a fabulous car in which to munch through a long journey at high speed. The gearbox is smooth and very fast, the engine sounds deliciously potent and has that any-rev flexibility that conveys a sense of omnipotence, and the stability at high speed is superb. Add to that the typically Jaguar smooth, consistent steering weighting and a ride that is firm but still breathes with the surface and you can only conclude that the XFR-S Sportbrake is a very tasty proposition indeed.

The Sportbrake feels at home on roads less arrow-straight, too. The ride is on the firm side but the damping is very good indeed. Wheel control is assured and although you can feel ragged surfaces, the Sportbrake remains composed. Through long, medium-speed corners it feels terrific. There’s perhaps more body roll than you might expect and less grip than a BMW M5, but you can feel the limits very clearly and work around them with real accuracy. There’s tons of oversteer to be had if you want it, but actually the Sportbrake is at its best when it’s hooked up and just teetering on the edge of a slide.

So the XFR-S Sportbrake is a seriously desirable superestate. The engine has just the right combination of smooth manners and brutality (although the delivery lacks a bit of top-end sparkle) and the chassis is controlled but can get down and dirty when you fancy it. It hasn’t quite got the control of an E63 AMG, nor the sharpness of steering response, and it’s a slightly less aggressive proposition than the saloon version. Even so, we’d like to spend a lot of time in this car.

With BMW bowing out of producing M Division estates a number of years ago, the XFR-S Sportbrake’s most obvious rivals are made by Audi and Mercedes. Thanks to the wonders of German niche busting, each offers up two alternatives – regular estates in the shape of the RS6 Avant and E63 AMG Estate, and more style-led foes in the form of the RS7 Sportback and CLS63 AMG Shooting Brake. The XFR-S sits between the two camps on bootspace, and after the zany E63, it is the most exuberant to drive.

Among some of the more frivolous options available (a £1295 carbonfibre engine cover perhaps most superficial) there is a pleasing amount of practical options, including an interior ski hatch, a host of different roof boxes and a rubber loadspace liner. There’s something implausibly cool about taking an £83,000 car honed on the Nurburgring to get rid of old furniture are garden cuttings at the tip.