evo's road test review of the all-new Jaguar XJ supersaloon. Does its performance live up to the striking looks? 5-litre V8 driven 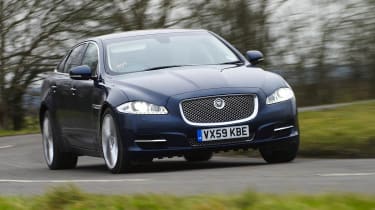 What is it?This is the new XJ, replacing the previous generation version, which first appeared back in 2002. Three different versions will be going on sale at launch; a very impressive 3-litre V6 diesel (0-60mph 6secs, 184g/km), a 5-litre V8 petrol (0-60mph 5.4secs, 269g/km) and 5-litre V8 supercharged petrol (0-60mph 4.7secs, 289g/km). All models are available in standard or long wheelbase format. This one costs £74,355. Technical highlightsThe new XJ is incredibly light compared to its rivals thanks to having an all aluminium construction. This new XJ is at least 200kg lighter than its rivals, benefiting performance, economy and handling. Inside, the new XJ is refreshingly different to any Jaguar before too, featuring an LCD screen for the dashboard, which changes to suit the different chassis setups available to the driver. Check out those dials… What’s it like to drive?The new XJ still has all the wafting ability you’d expect from a Jaguar limo but it’s the XJ’s new-found agility that really impresses. This car has been set up to be as good to drive as it is to passenger in. We drove the V8 5.0 petrol version as Jaguar’s development team reckon this is the sweetest handling of the trio, as it’s also the lightest.

With near perfect chassis balance, the handling is much more akin to something a lot smaller than the seventeen and a half foot limo a new XJL actually is. Ride comfort will prove contentious though, as while this is the best riding modern Jaguar, it’s a lot stiffer than Jaguar saloons of the past. How does it compare?It’s very competitively priced, with the range starting at £53,775 for the V6 diesel, rising all the way to a supercharged V8 petrol version which tops out at £90,455. Unsurprisingly, Jaguar is expecting most sales in Europe will be the very impressive diesel version, rather than the 5-litre petrol version here, but if you’re after an extremely spacious car that’s also great to drive, this is the one to pick. Anything else?All models of XJ have a glass roof, which helps lift the cabin ambiance above its rivals. The car needs to have the 20in wheels fitted as it looks plain wrong on smaller wheels and is very sensitive to body colour due to the controversial hoop of body colour that spans the rear of the roofline.