Land Rover’s sleek mid-sizer to get a flagship performance variant, but will it be able to rival the best performance SUVs? 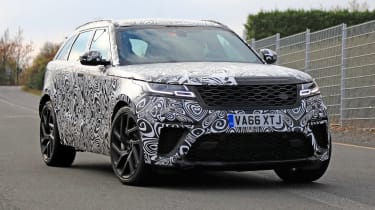 Land Rover has been spotted testing a Range Rover Velar with the design hallmarks of a flagship SVR performance model. The Velar is currently the best-handling Range Rover yet (although that’s hardly saying much), so is this finally a Range Rover that’ll be able to rival star performance SUVs like the Alfa Romeo Stelvio Quadrifoglio and Porsche Macan Turbo for driving pleasure?

Unlike those rivals, though, we suspect that the Velar will go the whole hog and include a supercharged V8 engine with over 500bhp, matching the Alfa and properly trouncing the new Macan Turbo’s 2.9-litre turbocharged V6. Further evidence of its likely V8 powertrain is its use in the new Jaguar F-Pace SVR, a model that shares its basic chassis with the Velar.

> Click here for our review of the Range Rover Sport SVR

There will likely be plenty of changes inside, too, with the smooth, glassy finish of the Velar’s dash peppered with new carbonfibre trim, combined with racier seats and new colour combinations.

The current Range Rover Sport SVR features a 575bhp version of the 5-litre supercharged V8, but thanks to the Sport’s substantial weight and size, we expect this Velar SVR to be even faster, despite its likely reduction in power in line with the Jaguar F-Pace SVR.

The Velar SVR will hit the road next year where it’ll have plenty of hot SUV rivals to battle it out against, including the aforementioned Alfa Romeo and Porsche, and the AMG GLC63 S and incoming BMW X3M.

The Range Rover’s new powertrain improves an admittedly aging package, but age doesn’t inhibit regality and it still has that in excess
Range Rover review – verdict, specs and rivals

The modern Range Rover continues to define the luxury SUV just as its ancestors did, and despite strong rivals is still something special
MY21 Range Rover revealed with new straight-six diesels

Limited edition celebrates the golden anniversary of the iconic luxury SUV, with some classic colour options