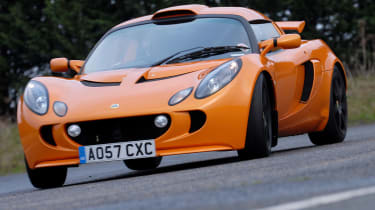 I’ve been of the opinion that Lotus needs to do something different, and soon, for a couple of years now. The Elise and Exige are fabulous, but surely Lotus has explored and exploited that clever aluminium chassis to the limit? The Europa, a good car but a sales flop, seems to prove the point. Customers want a genuinely new Lotus, bigger and more powerful but still retaining the core Chapman values of low weight and intelligent use of materials. Customers want a 21st century Esprit…

Of course there’s another school of thought. One that suggests that the happy consequence of the lack of funds to create a new model line is that Lotus has honed what they do have to perfection. Just spend five minutes behind the wheel of the 2-Eleven for proof, they’d say. And they’re right – the 2-Eleven’s a triumph. It’s also fresh in my memory as I drive up to the gates of Hethel for an appointment with the new Exige S Performance Pack. The tiny coupe has a lot to live up to…

The option packages for the 2008 model Exige S have been simplified, but the one you want to know about is the Performance Pack, which costs £3000. Tick the relevant box and the Exige S gets serious. Power jumps to 240bhp, up from 218bhp and exactly the same as the limited-edition 240R. Bigger, 308mm discs and four-piston AP Racing brakes further focus the Exige for track use and the S also gains the clever variable-slip traction control from the 2-Eleven. It’s a neat system, allowing you to dial up the tolerance of slip from 1 through to 9 per cent on the steering column-mounted dial; one last click and it turns off completely. A display on the dash tells you how much help you’re getting from the system. Oh, and there’s a launch control system, too. Nice.

A full-length roof scoop for the intercooler intake adds significantly to the Exige’s racer-for-the-road promise. But while the outside looks more uncompromising than ever, inside there are soft-touch materials on the dash and door cards as well as a new instrument cluster. Tight dimensions and the exposed aluminium tub will always mean the Exige S feels very specialist, but the ambience is certainly a bit more ‘luxurious’ than before.

No matter, the Exige S is still a proper sports car and all the better for it. You can feel it in the way it breathes with the road, in the detailed steering, the tight body control – and the performance. The four-cylinder supercharged Toyota engine is smooth yet ferocious, even if the fizzing metallic engine note is pretty nasty. Even using just 5000rpm, the Performance Pack-equipped Exige makes incredible progress, lunging between corners on a thick wodge of torque. Really delve into the full 8000rpm available and it’s clear that in terms of pure pace the Exige is now playing in the big league: according to the factory, 0-60mph takes just 4sec and 0-100mph just 9.9.

Of course it’s not the outright performance that counts, but what you can effectively deploy on the road. And here the Exige S is even more impressive. Traction is simply stunning and the speed you can carry into a corner takes serious mental adjustment. Even in the damp conditions in which we tested the Exige, the dry-weather-orientated Yokohama A048 tyres cut through the slime and had a tenacious hold on the surface, whether it was lumpy and pock-marked or smooth as a racetrack.

As with all Exiges, the real thrill of this car is the precision with which you can take apart any road. It’s so compact and so accurate that you never miss an apex, never feel compelled to back off simply because the road is narrowing or because the body is starting to float over suspension struggling to cope. You point, it turns; squeeze the throttle and the balance shifts according to your input, feather the brakes and the AP Racing callipers really wipe off speed – your every action is perfectly matched by the Exige S.

The Performance Pack simply ups the speed by 10 per cent or so. It doesn’t overwhelm the chassis at all, but it does tip the power-to-grip balance in your favour. And that means you really feel the benefit of the variable-slip traction control. I selected 9 per cent slip and left it there – it gives you the most natural- feeling chassis but still provides a get-out-of-ditch-free card should you really overcook things. To be honest you rarely call on the traction control’s services on the road, such is the mechanical grip and traction, and if you do it’s a very subtle trimming of your throttle rather than an obvious and frustrating stutter. Be warned, though: this is traction control and not stability control – lose it on the way in on the brakes and you’re on your own.

The balance is one of mild understeer – like many Elise/Exige variations before it. If that sounds slightly underwhelming then it isn’t, not on the road at least. You get your thrills here from the feedback, the agility and control. Oversteer would simply be a distraction from getting from A to B as quickly as possible.

On the track things are different. The 2-Eleven really sets a very high standard – retaining the stability and grip we’ve come to expect from a Lotus but bringing a new level of adjustability and a softer edge between grip and slip. The Exige simply can’t replicate the same delicacy, the same sense that you can do whatever you want with the chassis – keep it hooked-up and neutral, lean on a cushion of understeer or use throttle and brakes to get it dancing gently in a four-wheel drift. Instead it feels more doggedly understeery at the limit, and although you can make it oversteer, it feels less natural, less secure than in the 2-Eleven.

Compared with anything else however, the Exige S Performance Pack is simply awe-inspiring. There’s so much grip, so much control and so much raw speed. The brakes (with much improved feel and none of the dead pedal-travel the first ABS-equipped cars suffered from) and tyres are hardly troubled despite the consistently high g-forces they provide, the engine is manic at the top end and yet tractable out of slower corners. As a trackday tool it’s a brilliant package – faster than a GT3 in most hands and much cheaper to keep in tip-top condition. Only a slightly obstructive ’shift occasionally jars you out of your focus on the tarmac unfolding ahead.

It’s not cheap, though. The basic Exige S is £34,550. You’ll definitely want to add the Performance Pack (£3000), but this car also came with the Touring Pack (leather, more sound insulation, full carpets, iPod connector, cup holder!) at £2000, air conditioning at £1000, lightweight alloys at £1000 and the Burnt Orange paint is a £2000 option. That’s £43,550: big money for a little car, but still competitive in terms of performance-per-pound, especially if you bring lap times into the equation. The bottom line is that I’m still clamouring for the Esprit, but in the meantime the Exige S Performance Pack will do nicely…