Maserati Levante Trofeo review – is the most powerful series-production Maserati ever worth its £125,000 price tag?

A charming, if flawed, high-performance SUV 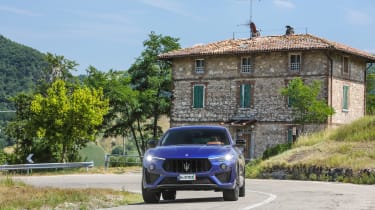 SUVs are a part of the street furniture, even if you’ve never owned one, and as much as they might be the antithesis of the traditional sports car, they have played a huge part in the survival of some of the best-loved brands – including Maserati. The Levante has only been around since 2016 but is already the best-selling Maserati of all time, having shifted over 40,000 units worldwide. Having already given the range a fillip with the addition of the diesel version alongside the V6 petrol, Maserati is now turning the heat all the way up with two turbo V8s: the GTS and this, the full-house Trofeo.

More power and performance, revised suspension and a series of detail changes inside and out mark out the GTS and Trofeo from lesser models in the range, and put them in direct competition with high-end opposition such as the Porsche Cayenne Coupe Turbo, Audi’s SQ8 and the Lamborghini Urus. The result is a machine with far greater appeal than the standard car, with the engine dominating the driving experience. It can’t match the ultimate dynamic finesse of the Porsche but makes a tempting alternative to the German options. 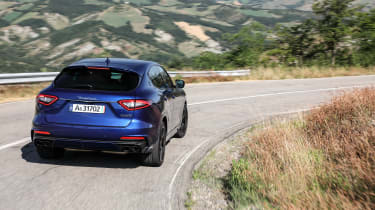 Both versions share an F154 3.8-litre twin-turbo V8, already seen in the Quattroporte GTS and related to the 3.9-litre unit in Ferrari’s 488 models, hooked up to the eight-speed ZF automatic gearbox and four-wheel-drive system seen elsewhere in the Levante range. In top-spec Trofeo spec it delivers a significant 572bhp and 538lb ft of torque, making it second only to the MC12, and with launch control engaged it can batter through the 0-62mph sprint in just 4.1sec.

Detail changes to the 3.8-litre V8 include a different crankcase, crankshaft assembly and belt layout to pair it with the ZF transmission, while the turbochargers, cylinder heads, pistons and cams are specific to the Levante. The Q4 four-wheel-drive layout continues to send all the power to the rear wheels unless slip is detected, when up to 50 per cent can be shifted forwards. A mechanical LSD is included with 25 per cent lock-up under power, while torque vectoring is provided by braking an inside wheel. 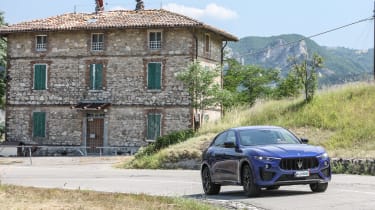 The extra performance and a 60kg increase in weight has required a retune of the air suspension and Skyhook damping system, as well as a new Corsa driving mode above the existing Sport, Normal and ICE settings. Corsa sets the suspension 35mm lower than normal and the dampers in their stiffest setting. In addition, the Levante V8s have Integrated Vehicle Control, a predictive system working within ESP that can modulate the throttle and brakes, with the Trofeo’s calibration designed to reduce understeer.

An SUV might not be your first choice of home for a thumping V8 but it’s difficult not to get excited about having 572bhp at your disposal. It fires with a modest chorus from the exhaust, and flicking between the drive modes to get to the loudest settings reveals most of the noise comes from the rear rather than through the cabin. But you can’t hide the good breeding, and the combination of effortless torque and a willingness to rev makes it an engaging companion.

The new gearlever is a definite improvement over the previous version, with a JLR-like trigger style that makes it easier to access the park position and flick between manual and automatic modes. The design of the paddleshift also shows a commitment to keen driving; big, fixed-position paddles made from carbonfibre, so much so that reaching some of the stalk controls is a bit of an effort. Left in automatic with Normal mode engaged, the Trofeo is as docile as you could wish for. Throttle response is keen but not hyper-sensitive, gearshifts are smooth and the steering is impressively feelsome for an electric system. 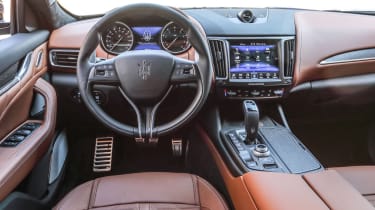 Ramping up through the drive modes adds an edge to the Trofeo’s behaviour without ever making it unruly. The ride is never truly settled, with the air suspension occasionally pitching around over large undulations, but it is never more than an occasional irritation regardless of which drive mode is engaged. In Sport it is keener to hold on to gears and the throttle response is a shade sharper, but it is in Corsa mode that the Trofeo gives its all.

Even with 538lb ft of torque coming in at 2500rpm the V8 encourages you to use all the revs, rewarding you with top-end fire and a thumping backbeat to go with it. There is no questioning the Trofeo’s speed, allowing you to blast between straights and overtake slower traffic without hesitation. 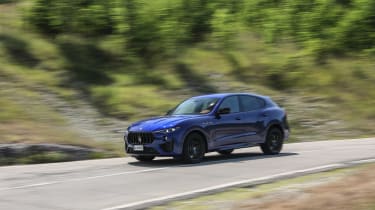 The engine may be the dominant character, but the other elements don’t fall short. The steering, while never super-sharp, does a good impression of a competent hydraulic system and doesn’t get bogged down with artificial weighting; it is reliably consistent and keeps you plugged in to the surface and grip. In the stiffest Corsa setting body roll is largely checked, and you are always aware of your height and the masses involved, but this is still a fun car.

The ESP and IVC systems are always keeping you a little in check; any oversteer will only arrive through injudicious use of weight transfer rather than an indelicate right boot, even with the rear-biased torque split.