It's more than a slinkily clothed E-class, says Mercedes. We disagree 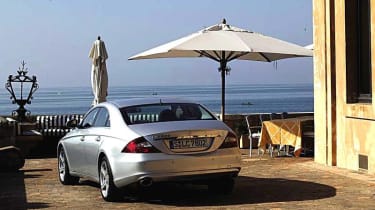 There aren't many four-door saloons that stop you dead in your tracks the first time you clap eyes on them, but the CLS does. It might be based on the familiar, humdrum E-class but it's had a serious dose of metal surgery applied to that model's familiar but unremarkable body. If you didn't know already, you'd never guess its origins, and I can also guarantee you'll never see one as a taxi, but we'll come to that later.

Mercedes has moved the CLS from concept to reality in record time to exploit a new niche that it thinks it has discovered - the four-door coupe. Traditionally, coupes have always had two doors (until Mazda broke the rules with the RX-8) but Mercedes believes this limits their appeal (and therefore selling potential) so they developed the CLS, which combines a coupe's sleek looks with a healthy dose of practicality.

Mercedes has put a lot of effort into the design of the CLS. A lot of the interior, for example, could have been shared with the current E-class but the architecture is completely different. For a start there's a massive swathe of burr walnut across very nearly the entire dashboard. Available in matt or gloss finish, to my mind this huge chunk of wood is not entirely successful style-wise as it seems completely at odds with the otherwise fresh, modern feel of the rest of the car. The wood-trimmed centre console houses the usual Mercedes auto gear selector (this time with seven speeds to choose), and flows into the rear compartment, splitting the rear bench into two separate seats and thus making the CLS an unattractive proposition for taxi firms.

To give the CLS a more sporting feel Mercedes has made some subtle changes to the chassis compared with the donor saloon's, including steering that's 11 per cent quicker for brisker turn-in and a subtly livelier feel. The air suspension (standard on the 500, optional on the 350) allows the car to sit 25mm lower, too, while the effective spring rate of the air suspension is slightly firmer, as is the damping, although the anti-roll bars remain the same size.

Strange, then, that the driving experience doesn't engage the driver very much more than a standard E-class would. Make no mistake, this is a superbly accomplished chassis in terms of comfort and refinement but you do feel very distant from what's actually occurring where tyre meets tarmac (in fact this is a criticism of all Mercs these days, bar the new SLK).

The 500 doesn't feel that much livelier than the 350 either and is one of the most un-V8-sounding V8s I've ever come across. It's thrashy at the top end and silent lower down, with no classic rumble to speak of, and so doesn't endear itself to the driver nearly as much as the eager V6-engined 350.

The 350 has the added bonus of being some 80kg lighter (mainly over the front axle), lower geared and higher revving, while being almost £10,000 cheaper into the bargain. It feels far more nimble to hustle, with a quicker response to steering inputs and less propensity to understeer at the outer limits.

It seems that despite the sporty overtones and aspirations, the CLS's main strength is its practicality, with its huge boot and four doors. Then again, even adult rear-seat passengers get a seriously compromised view out of the side windows.

I hesitate to say it but the CLS does come across as an E-class in a party frock rather than the BMW 6-series rival its makers would like it to be. But then again, Mercedes plans to make just 30,000 a year (some 10 per cent of E-class output) so it'll be relatively exclusive. And it's still one hell of a party frock.