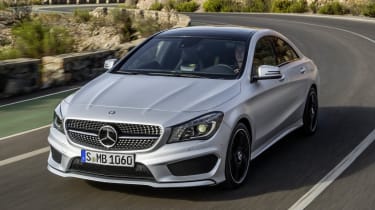 What is it? This is the Mercedes-Benz CLA. It looks a little bit like a dumpier, stumpier CLS but instead of a suave rear-drive chassis it’s actually based on the front-wheel drive A-Class. A ‘four-door coupe’ with a three-pointed star on the grille for sub-£30,000 is sure to be a recipe for success. Technical highlights? It has McPherson struts up front, a multi-link rear axle and is powered a range of four-cylinder petrol and diesel engines that drive through a six-speed manual or seven-speed twin-clutch gearbox.  The most exciting model from evo’s point of view is the CLA250, powered by a 2-litre direct injection and turbocharged engine producing a decent 208bhp and 258lb ft. Sadly it’s pushing a rather portly 1480kg, although its astonishingly slippery shape should help to pass it energetically through the air. In tiny-rimmed C180 BlueEfficiency spec the CLA has a drag coefficient of Cd 0.22. What’s it like to drive? As a sensible, premium and stylish statement it’s probably a mighty fine thing. Sadly, it’s not really on the pace dynamically. Not just for people like us, but for anybody with an ounce of sensitivity in their bones. The engine offers plenty of performance but sounds hopelessly dull and its delivery feels strangled at the top end. Of course the wide spread of torque is useful but the almost diesel-like delivery can feel rather turgid.  However, the real problem is with the 7G-DCT gearbox, which is incredibly slow-witted in Eco mode, too aggressive in Sport – downchanging into corners like a 17-year-old Ferrari owner in Mayfair and hanging on to gears when you just want an upshift – and then failing to really respond to inputs from the paddles in Manual mode. It’s not a patch on the ZF eight-speed automatic gearbox used by rivals. The six-speed manual is better but if fails to lift the CLA out of mediocrity, and is only available on less potent models, not this 250. The chassis balance itself is pretty tidy, there is understeer but also a surprising amount of throttle adjustability when you really get going. But the ride – whether the CLA is fitted with Comfort or Sport suspension – is ragged and its poor wheel control makes the car feel scrappier the harder you push it. It’s a shame because that underlying balance is rather sweet and the steering is accurate and has good feel, too. Somehow though, it just never really comes together for the CLA. We can only hope that the CLA45 AMG – complete with a Haldex four-wheel drive system – will be a more cohesive and exciting package. How does it compare? Priced at around £28,000 when sales begin in late summer, the CLA is priced above the A-class it’s based on and just below comparative BMW 3-series and Mercedes C-class models, rear-driven cars traditionally from a class above. A more fitting comparison for us is to a five-door BMW M135i. Not as stylish or good-looking as a CLA, but from £31,085, a proper drivers’ car with 316bhp and the choice of manual or automatic gearboxes. Anything else I need to know? That CLA45 AMG (previewed here) debuts at the 2013 New York motor show in April, so we should get to drive one in the summer. The recent talent seen in AMG-badged models has led us to expect big things.