We add a slightly less mad CLS to our fleet than last year's 63 AMG. And David Vivian thinks that's no bad thing 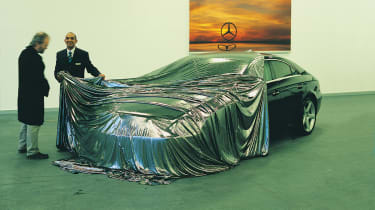 I know what you’re thinking. You’re thinking, ‘Is it a CLS 63 AMG?’ This is evo, after all. And, well, what with the CLS 63 being the most powerful four-door saloon that looks a bit like a coupe in the world and would blow your sideburns clean off, I suppose I’ve got to ask myself a question: do I feel lucky? Well, do I?

Bloody ecstatic, actually. And precisely because, under that plausible disguise (black paint, darker ‘privacy’ tints, 19in five-spoke AMG alloys, all badges deleted), our new long-term Merc isn’t the ridiculously rapid 507bhp 6.2-litre V8 AMG. Don’t take this the wrong way. I love ridiculous. For the best part of a week I hung on to the CLS 63 that obligingly lit up its rear tyres and taunted the exoticar contingent in last year’s eCoty with its brutal, bellowing acceleration and wonderfully sussed chassis. And I had an absolute blast. I even managed to keep my driving licence and buy the odd bottle of red wine with the change left over from my frequent visits to the petrol station.

A sustainable automotive lifestyle? Alas, probably not. Which is why, for the 12-month haul, the newly introduced but far from under- endowed CLS 350 CGI is a much better bet. In fact – whisper it – it might almost be mistaken for something sensible. Take the engine. Just six cylinders and 3.5 litres but, oh, the technology. Direct petrol injection with spray-guided combustion points is the way ahead for car petrol engines, according to Mercedes, delivering better fuel and thermodynamic efficiency than the wall-guided combustion process previously employed with direct injection. CGI (Stratified-Charged Gasoline Injection) is essentially a lean burn regime and nothing new but, in conjunction with the innovative piezoelectric injectors (which produce a uniform, hollow cone-shaped spray pattern with microsecond response times for multiple injections per power stroke) it’s been possible to extend this lean-burn operating mode to higher rpm and load ranges. So the engine stays leaner for longer, good for planet and wallet alike (30.1mpg on the combined cycle), while 288bhp, 269lb ft and 0-62 in 6.7sec douse any feelings of righteous sacrifice.

And it’s obvious, even taking things easy for the first 1000 miles, that this V6 is a peach of a motor – deliciously smooth and refined on part throttle, a brilliantly alert partner for the almost telepathically responsive 7G-Tronic 7-speed auto, and packing a mighty fine baritone voice under load, too. Listen for yourself – someone’s put a clip of a CLS 350 CGI being gunned from a standing start on YouTube.com. It’s at night and out of focus, of course, but the engine sounds serious beyond what one would imagine to be its performance remit.

But then that’s the kind of car we’d rather like our CLS to be for the next year, a subtler fusion of go and grace than that served up by the AMG but, at the same time, equal when it comes to remaining able while caned. Finessing the basic (£43,440) package is the key and, inevitably, that requires some additional cash. Extracting this from the understandably smitten is something of a Mercedes speciality. While just managing to dodge accusations of meanness in the provision of standard kit, it dangles so many tasty options in front of prospective customers, resistance is largely futile. In the face of such temptation, we didn’t go mad but, then again, we didn’t hold back either, dialling up £14K’s worth of options to take the ‘as tested’ total up to £57,500.

It all came wrapped up for us in what appeared to be a silver lamé cloak at Mercedes-Benz World, Brooklands – surely the only way to collect your new Merc if you’re at all interested in what you’ve just bought. The sequence of events moved smoothly through coffee, breakfast and a leisurely stroll through the model history of M-B over three floors, the ‘reveal’, the ‘handover’, the ‘familiarisation’ and, finally, on the low-friction steering pad, an opportunity to see just how effective ESP can be. By switching it off. And so another long-term test begins – on opposite lock.