Limited-edition model offers JCW-level thrills, but the price is hard to stomach 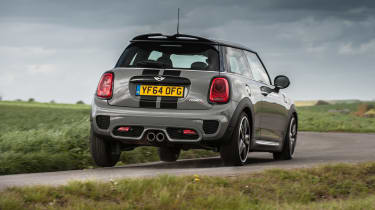 The Mini Cooper S Challenge 210 – which we’ll be calling the Challenge from now on – represents the middle ground between the regular Mini Cooper S and the all-new John Cooper Works range-topper.

As such it splits the two on power, takes styling cues from the latter without breaking too many ties with the regular S, and features some spotlights, a natty sticker kit and paint scheme to link it with the newly-launched Mini Challenge series. Just 210 will be made, and its metric power output is 210PS – hence the name.

Where the Cooper S uses a 189bhp version of Mini’s 2.0-litre turbocharged petrol engine and the JCW develops 228bhp, the Challenge finds itself between the two with 207bhp. Torque, at 221lb ft, is no different from the regular S and 15lb ft shy of the JCW.

It puts this power through both a six-speed manual transmission and the front tyres. Wheels are 18in John Cooper Works five-spoke alloy wheels. 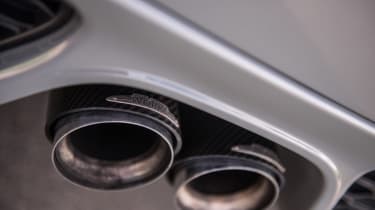 Visually, the Challenge 210 gets a coat of grey paint, ‘Challenge 210’ striping along the bottom of the doors and down the bonnet and boot lid, and the full John Cooper Works aero kit. There’s a smattering of carbonfibre trim too, though less differentiates the Challenge interior from the regular Cooper S. It’s no less comfortable and, as with all Minis, no less twee.

The most interesting addition though is a Bluetooth-activated valve in the John Cooper Works exhaust system. Billed as a track-only function (thanks to the increase in decibels – likely to fall foul of noise regulations on actual track days), the system brings the Challenge another step closer to its racing cousins.

Particularly entertaining on the right stretch of road. On large wheels and standard S suspension settings the ride is firm, but well-damped – bumps rarely throw the car off-line and it never feels like it’s failing to cope with the surface underneath.

The steering feels a little numb around the straight-ahead, albeit sharp to respond once you wind on a few degrees of lock, but while there’s never any true steering feel it’s predictable enough that you trust its responses. Sport mode, as we’ve become accustomed to, merely adds weight – but the increase in effort feels natural, rather than artificially heavy.

Darty steering and great balance make the Mini a hoot to tip into corners. There’s plenty of grip at the front axle and there’s enough throttle response (even in Normal mode) to adjust your line mid-corner, without any undue waywardness. Indeed, you can be quite aggressive with steering and throttle before the rear axle begins to slide.

In terms of performance, the Challenge feels pretty much ideal – its 207bhp is probably a sweet spot for the chassis, with enough punch for overtaking and dragging the nose out of corners without feeling excessive. The Mini’s standard rev-matching function on downchanges is excellent too, enacting perfect heel-and-toe changes every single time. Brake feel is good and there’s plenty of stopping power, though the car does squirm under heavy braking.

As the revs climb the exhaust emits a sporty rasp, but one must prod the Bluetooth exhaust valve actuator to enjoy the full effect. With the valves open, the race-car-like rasp is addictive, as are the gunshot pops and crackles on the overrun. 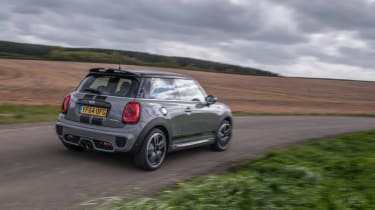 Standards among small hot hatches have never been higher. The Ford Fiesta ST and Peugeot 208 GTi 30th Anniversary (soon GTi by Peugeot Sport) are the two Mini must beat, however. Ford’s offering is most interactive with sweet steering and an effervescent engine, while the GTi is blisteringly quick and aggressive.

Others worth a look include the recently-revised Volkswagen Polo GTI, hugely improved over its predecessor but limited by nannying electronics, and the new Vauxhall Corsa VXR which touts trick dampers and an effective limited slip differential.

The biggest rivalry is sure to come from Mini itself, thanks to the new John Cooper Works. It’s more powerful and significantly cheaper, at £22,865. The JCW’s standard automatic transmission may put off some buyers, however.

At £29,990 the 210’s limited production run is probably as many as Mini can justify selling when the upcoming JCW is so much cheaper. The exterior addenda go some way to supporting the cost increase and the barmy exhaust system further still.

However, it’s a difficult car to make a realistic, head-over-heart case for. If it appeals, then go for it. Otherwise, wait for the JCW. On the evidence of the Challenge, it’s set to be a blast.