400hp and with just 44 produced, is this the greatest GT-R ever? 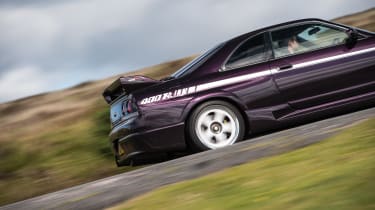 Just 44 examples of the Nissan Skyline GT-R Nismo 400R were hand-built at Nismo's Omori factory in Japan, making it without doubt one of the rarest Skylines ever created.

Most will remember Nismo's own unique yellow 400R, made famous by the original Gran Turismo game which it acted as a poster car for. This example is finished in arguably the defining Skyline colour - 'LP2' or 'midnight purple'.

Launched in November 1997, the 400R was inspired by the Skyline GT-R LM which had raced at Le Mans in 1995 and 1996. An extensive re-working of the R33 GT-R, Nismo left no stone unturned in its quest to build the ultimate road-going Skyline.

Firstly, the car loses the RB26DETT engine found in most Skylines and replaces it with the Le Mans-proven RB-X GT2 unit engineered by Reinik, the motorsport department of Nissan's own powertrain division. Featuring a reinforced block that was bored and stroked to make 2771cc, the twin-turbo straight-six RB-X GT2 makes 395bhp at 6800rpm and 347lb ft at 4400rpm. 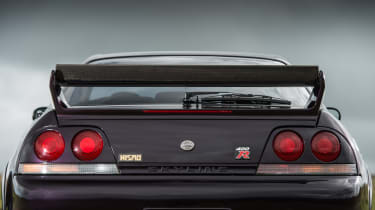 For those interested, we've also driven some of Nismo's more modern creations, namely the current-gen GT-R Nismo. You can read our full review of that car here.