59 Porsches are set to go under the hammer at the one-marque sale later this month. 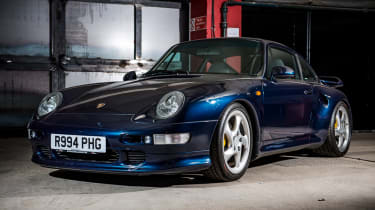 This weekend Silverstone Auctions is hosting an all-Porsche sale – 59 cars strong. This year’s event marks the third consecutive installment of the annual sale, with the timeline of consignments bookended by a 1955 Porsche Chamonix 550 Spyder and a Porsche 911 997 GT2. The most expensive car according to the pre-sale estimates, A Porsche 911 993 Turbo S, could leave Northamptonshire with a price tag north of £250k.

The Porsche 993 Turbo was the first of the breed to harness the traction-led benefits of all-wheel drive. In S form, packing 450bhp, 0-62mph is dealt with 3.6sec before the car reaches three figures in a staggering 8.9sec. The tasteful Ocean Blue finish on the car is contrasted by the grey leather interior trim and carbonfibre inlays. This example, one of 26 landed on UK shores almost a twenty years ago, has covered 36,122 miles. A figure north of a quarter of a million pounds is being touted as the final price and that’s hardly surprising for one of the last air-cooled Porsches.

• Most expensive cars sold at auction

Alsolikely to command a significant fee is a 1985 Porsche 911 930 Turbo SE; a far cry from the current model. Whereas the 911 991.2 Turbo majors in speed and absolute stability, the 930 is a white-knuckle ride that coined  the widow-maker nickname. Concealed beneath its ‘tea tray’ wing is a blown 3.3-litre flat-six rated at 300bhp. Slatted rear-arches, sill extensions and a bespoke leather interior denote the SE trim level – the LE shared the same design cues, too. The white Turbo is expected to fetch between £180-220k.

Top of the horsepower tree is a Porsche 911 997 GT2 in Clubsport guise. The 3.6-litre, pulled from the 911 Turbo, diverts 523bhp and 500lb ft of twin-turbo torque to one-axle – as opposed to two. Fire-retardant Recaros, a six-point harness, bolt-in rear cage and a fire extinguisher comprise the Clubsport Package equipped to this Basalt Black example. The hammer could come down anywhere between £120k and 140K.

Naturally, 911s make up the bulk of the consignments in this Porsche-only sale, the earliest of which hails from from 1968. Other desirable Porsche models prevent it being a totally rear-engine affair, although a Porsche tractor certainly is a surprise addition.

Besides the 911s, a 1970 Porsche 914-6 and two 924 Carrera GTs are rare gems. The former not only has two more cylinders than most 914s, but also benefits from a comprehensive period engine rework. Delivered by the Parisian Porsche dealership behind the Le Man-winning 914-6 GT, this example was privy to a host of upgrades that coaxed an impressive 160bhp from the 2.0-litre six. The hammer should fall near £50k according to estimates. 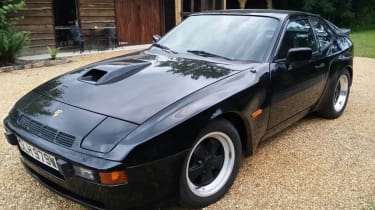 To achieve homologation for the Group 4 Sports Car Class at Le Mans, Porsche produced 75 hardcore, 924s for the UK market. Confusing the Carrera GT for any old 924 is not a mistake easily made: the off-centre bonnet-scoop, flared fenders, and box rear arches gave this 924 a muscular ensemble fit for a race car. The cheaper of the two examples should collect in the region of £35k, the other has been slapped with an estimate almost twice that thanks to a recent, comprehensive restoration.

The auction is taking place at the Wing, Silverstone Circuit, on 21st October.